Pandora’s Tower was the third pillar of the Operation Rainfall fan campaign, and the only one of the three that I picked up when it was eventually brought over to the US. It’s an action RPG with a chain battling/traversing mechanic that makes good use of the Wii Remote, featuring dungeons and bosses that feel somewhat similar to the types you might run into in a Zelda game, with all sorts of special moves and strategies needed to progress. 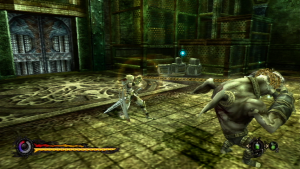 In terms of story and tone, however, it is darker than any Zelda, with a plot that has much more in common with Shadow of the Colossus: a soldier seeks to cure the young woman he’s enamored with of a curse that will eventually turn her into a monster, and to do that, he needs to kill a set number of “Masters” located within thirteen interconnected towers. Also, he’s from an enemy nation, the woman—a follower of a religion that requires strict vegetarianism—needs to eat the flesh of these Masters to lift the curse, and the two of them are accompanied by a creepy old lady from a mysterious tribe of nomads. For a game with only these three characters and all the dungeons grouped together in one place, there’s a lot more going on in the story than you might expect.

Going back to that “darker than Zelda” thing for a moment: this game is not so much gory as grotesque. The scenes of the young woman eating monster flesh are unsettling, many of the monsters are hideous hulking beasts, and the entire game is awash with a grimy palette heavy on black, looking more like a PS2 title than a Wii one. Aside from the limited motion controls, used to aim and manipulate the chain weapon, it plays much like an older game as well. There’s no player-controllable jumping, another thing borrowed from Zelda games of the era, and some of the movement feels a little stiff. It’s a weird, fascinating thing of a game, the sort of JRPG one doesn’t see very often anymore, and I’m looking forward to unraveling the rest of its mysteries. 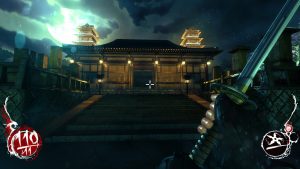 As for Shadow Warrior, it is also certainly a thing, but in completely different ways. It’s a remake of a 1997 3D Realms FPS made by Flying Wild Hog, the studio responsible for the slick-on-the-outside but old-fashioned-on-the-inside Hard Reset, and they continue this sort of design here. The combat, which includes a katana complete with unlockable special moves, is a bit more complex than it was in Hard Reset, and certain enemies are more sophisticated as well, but at its heart, this game is old school. For the most part, I am fine with this—the maps are fun to roam around in, and the enemies and weapons range from serviceable to great—but the sound design’s emphasis on enemy closeness and not actual location tripped me up quite a bit at first and was irksome to deal with.

3D Realms’ “edgy” 90’s style humor is another throwback, and it’s also the aspect of this remake that has aged the worst. Shadow Warrior is Teenage Asiaphilia: The Game. It has trouble deciding which is cooler, Chinese or Japanese culture, and constantly mixes and matches the two. The main character’s name, Lo Wang, is a crude joke, one of many that populate the game’s story and other scattered bits of text, with certain fortune cookies being particularly corny. The finer details of the story can be hard to follow, but surrounded by this much stereotyping, does it even matter? At least the exploring, slicing, and shooting parts are fine, and admittedly, a lot of the scenery is pretty to look at, even if one’s vista is interrupted every so often by humping rabbits. Still, though, after this, I have no desire to touch any 3D Realms game ever again. At least I got this one for free.

In between those games and the addition of my favorite Pokemon generation, the fifth, to Pokemon GO, my mid-to-late September has been nothing short of eventful as far as gaming has gone. Right now, I’m hoping to be done with the three games I discussed here by early October, leaving the rest of that month free to tackle a lengthy JRPG—and possibly a couple of other, shorter games—before the one-two punch of Pokemon Shield and DOOM Eternal in November. Even though Shin Megami Tensei IV has been staring at me from my backlog for quite some time now, perhaps after the grimdarkness of Pandora’s Tower and the gore of Shadow Warrior, I should delve into something a bit lighter. We shall see.