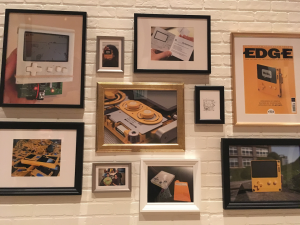 For the Expo Hall in general, it felt like there was more space dedicated to hardware (Lenovo, Corsair, Asus, etc.), ancillary services (Mixer, Discord, etc.), and merchandise (First 4 Figures; mini shops run by Square Enix, Nintendo, and others; etc.) and less to games. Granted, things have been moving in this direction for awhile now, but the absences of Bethesda and Microsoft put this situation into stark relief. On a more positive note, several smaller publishers have been steadily gaining more of a presence at the show. It was nice to see NIS America have a proper booth this year, and tinyBuild had the most memorable setup of any indie at the show, with coffins and fog machines for showing off Graveyard Keeper.

Speaking of which, PAX West is a great place to take note of the current trends in indie gaming and development, live and in person. Some years back, not long after the success of “Double Fine Adventure”, every other indie video and tabletop game had a “support our Kickstarter!” pitch going on. At PAX West 2019, indies were asking to be put on Steam wishlists, which are incredibly important for small developers these days. The types of games on offer covered the usual wide ranges of styles, though there did seem to be fewer titles with “retro” pixel art aesthetics than in past years. Another thing I found interesting was how popular the interactive fiction panel was; as best as I can recall, a similar panel that I had seen several years ago wasn’t as packed. Visual novels, a related genre, have really taken off in popularity these past few years, so perhaps that is a major reason for the change. 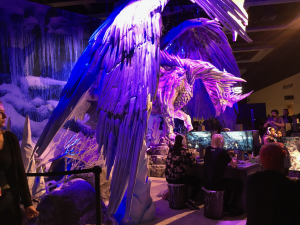 Out of the mainstream publishers, Capcom had the most impressive booth, for Monster Hunter World: Iceborne.

Of course, changing trends over time are not the sole province of indies; there were some interesting things going on at the larger developers’ and publishers’ booths. Remakes, remasters, and other such rereleases have been popular for the past several years, and one of the most high-profile of these projects to date, Final Fantasy VII Remake, had a big booth at the show, decked out with familiar iconography and facsimiles of concept art. Square Enix went all-out with their promotion of this game, to the point where photography of gameplay footage of this remake was forbidden at its booth. They also had some kiosks showing off Final Fantasy VIII Remastered, and elsewhere, PAX-goers could try out Spacebase Startopia (either a remake of or spiritual successor to Startopia) at Kalypso’s booth, Disgaea 4 Complete at NIS America’s, and The Legend of Zelda: Link’s Awakening at Nintendo’s. Attendees could also nurse their nostalgia through the aforementioned merchandise booths, as well as PAX mainstays like the Classic Console rooms—which featured numerous Steel Battallion stations this year—and arcade games from Portland, OR barcade Ground Kontrol.

Like the Expo Hall, this year’s spread of panels was notable for what wasn’t there. Two of my usual PAX highlights are the PAX Rumble and Game Show Night, neither of which were present this year (League of Heels did have a panel called “Tall Tales and Other Stories”, but no “main event” as far as video game wrestling goes). However, there were still some interesting panels to be found, including one featuring the creators of Dwarf Fortress, another in the form of a conversation with former Valve writer Chet Faliszek, the consistently-entertaining The Improvised Postmortem, and the first West presentation of the Great PAX Bake-Off, a combination baking and video game competition featuring Easy Bake Ovens and “cakes” of questionable provenance. My favorite panel of the show was “A Complete and True History of Jason Statham in Videogames”, in which its humorous fictional premise was presented very seriously, and the whole thing ended abruptly after an audience member raised a certain question. Hope someone got video evidence of the whole thing.

It wasn’t the best PAX ever, but it was decent enough, as evidenced by my feeling that the weekend was over far too quickly. We came away with more games on our personal wishlists, were entertained and informed by various panels, hung out with friends we don’t see too often, did some shopping (I also picked up some some Pinny Arcade pins the day before), and had a fun time in general. There were also the little things: smoothies at Juicy Cafe, late-night laughter-filled meals at Tamari Bar, and finally deciding which starter to go with in Pokemon Shield based on Nintendo’s booth display (Grookey; I have a personal fondness for British mailboxes). As for our future plans, now that we’re back on the East Coast, we plan to attend PAX East, which is happening sometime in the first half of next year. It’s said to be the largest PAX event these days, and the venue itself has changed since our first and only visit to East, back in 2010, so we’re looking forward to seeing what it’ll be like. As for West, we probably won’t be back for another couple years or so. In the meantime, if you’d like to see more of PAX West, including games I enjoyed on the show floor that weren’t mentioned here, please check out “Sights of PAX West 2019” on Twitter.