First up is Disgaea 4: A Promise Unforgotten, which I took a break from twice: once to move, and again because our TV broke. Despite these interruptions, and a grind-heavy difficulty curve, I managed to finish it. The story this time around is the best since the original Disgaea‘s: a vampire tyrant turned lowly Prinny instructor, Valvatorez, becomes fed up with the mismanagement of the Netherworld and sets out to conquer the Presidency. As is typical of JRPG plots, there are some twists and turns, and the storytelling gets a little messy toward the end, but in general, it’s a solid tale. Disgaea 4 will be rereleased in a “Complete” edition in October, so if you’re interested in it, that will likely be the best way to play. However, please note that I was not kidding about the grind; it is the hardest Disgaea I’ve played to date. 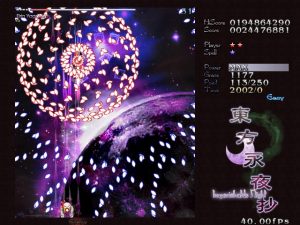 Next is my first ever mainline Touhou game, which I picked up out of sheer curiosity. Touhou Eiyashou: Imperishable Night is the eighth “Touhou Project” and, like the others, is a frenetic bullet hell shooter starring bishoujo shrine maidens, supernatural beings, and the like in frilly clothing. Even using the easiest possible difficulty settings (their presence being a major reason why I picked this particular game to start with), Imperishable Night is challenging, but I managed to beat it, and now I have a better sense of why Touhou is so beloved. The music is catchy, the characters are kind of charming (if poorly drawn), and the bullet patterns are beautiful and inventive. This long-running doujin series is worth experiencing even just once, particularly for those who enjoy shmups.

Following that was Final Fantasy Crystal Chronicles: My Life as a King, one of my final pickups from the Wii Shop Channel. It’s full of the polish and flavor that one expects from a Final Fantasy title, but as a city builder, it feels slight. The actual building parts were fine, as was the adventurer management, but it’s the amount of information about houses and certain other facilities that I wanted more of. Keeping track of who lives where is necessary but difficult; it can only be done in-game by physically going to a house, knocking on the door, and asking the inhabitants. There was also nothing interesting that could be done with bakeries and emporiums once they were built, whereas adventurer-oriented shops can have their inventories improved over time. It’s worth noting that My Life as a King was one of the first Japanese games with DLC, before developers learned what does and doesn’t work in that format; some of it would’ve been great to have in the base game, but c’est la vie. Of course, since the Shop Channel is closed, there was no way for me to buy any of it even if I wanted to, but the game is perfectly playable without it. Overall, it was okay, an interesting curio of its time, if not much else. 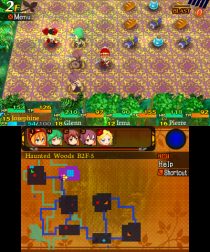 Afterward, I busied myself with the rest of the Dungeons 3 DLC, freshly picked up from Steam’s Summer Sale, and beat something else with “dungeon” in the name: Etrian Mystery Dungeon. I love Etrian Odyssey, I love Mystery Dungeon (and its better knockoffs, like the Izuna series), so this seemed like a match made in heaven. For the most part, it was very good. The roguelike dungeon crawling was well done, though managing four characters at once (three of which are controlled by the game’s AI during most turns) can be cumbersome, especially when entering monster-filled rooms. FOEs, called DOEs here, have their own special quirks for this game, and provide interesting challenges. What I didn’t like were certain optional quests—like everything else in the mystery dungeons, resource points are randomly generated, making quests that involve them much harder than they would be in a mainline Etrian—and the wordiness of the plot. Etrian tales are typically tightly focused, with villager chatter full of information and tips, but Etrian Mystery Dungeon adds an additional layer of subplots and irrelevant sidestories. Throw in a particularly convoluted way to wrap up the main story, and it loses a little more of that Etrian feel; the story seems to be much more about the town and its inhabitants than you and your party going on an adventure. On top of that, it’s on the easier side for a Mystery Dungeon, which, like Etrian, got its start as a “hardcore” series. Though it was better than My Life as a King, this is another one for the “okay” pile.

Like Disgaea 4, the next game I beat was something I’d been playing on and off for months: Super Smash Bros. Ultimate. I spent the vast majority of my time here progressing through the campaign, World of Light, and completing other single-player battles via the Spirit Board. Despite being solely battle-focused, World of Light is an improvement over the last Smash campaign I played, Brawl‘s Subspace Emissary. It’s long, enjoyable, and the battles often have clever ideas behind them (though a few, like the one for Pauline’s spirit, are rather frustrating). Even though I’m not a competitive multiplayer person these days, I do enjoy Smash, and thanks to these features, feel like I got my money’s worth with Ultimate.

After beating World of Light, I set Kirby, my Smash main, aside and started Baba is You. This puzzle game first came to my attention via a Giant Bomb Quick Look, which is as fine an introduction to its mechanics as I can think of. Basically, Baba is You is set in a world where the words on screen define the rules for that particular level: Baba is you, flag is win, wall is stop, and so on. However, these words can be rearranged to create new rules, which can be used to trigger that “win”. As the game goes on, new words are introduced—nouns, verbs, conjunctions, etc.—and the puzzles get more complicated. The magic of being able to rewrite the rules quickly gives way to the frustration of overcoming the obstacles thrown at you in each new level; in short, this is one of the most clever, and difficult, games I have played in a long time. I’ve had a couple bursts of inspiration for some of those harder areas, when something finally clicks, but it doesn’t look like I’ll be done with this any time soon. 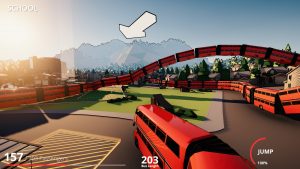 Finally, I’ll discuss two other games I’m currently playing. The first of these, Snakeybus, is best described as a mix of Snake and Crazy Taxi. Pick up passengers on a 3D map, take them to their destination, and your bus grows in length. Drive well enough, and it’ll become so long that you will run into the tail end, or the middle, while zooming around. A very un-bus-like boosting mechanic will let you jump over obstacles, including yourself, plus there are also ramps and hazards (water, bottomless pits, etc.) to help or hinder you. Like Catlateral Damage, it’s a freeform game with a relaxing vibe and a handful of different ways to play. It’s also a little buggy, but is still a good bit of fun.

The 3DS port of Luigi’s Mansion is the most recent game I started and, despite some awkward motion controls (which I have to use since I have neither a New 3DS nor a Circle Pad Pro), is pretty enjoyable. I’d been wanting to get the original Luigi’s Mansion for GameCube for a long time, but its high prices on the aftermarket dissuaded me from doing so, so I’m grateful this port exists. I might write more about it later, but for now, I’m finding it to be a neat Super Mario-themed take on survival horror.

Aside from those and the usual Pokemon GO, there is one last game I’ve been playing, Kirby’s Dream Land 2, but I haven’t been too impressed with it and as such, it’s on the backburner. And that’s it for now! Sorry this post got so long, but I wanted to write about everything I’d been playing lately, even the mediocre games. My next post will likely be about that upcoming project or PAX West, whichever wraps up first. Once again, until next time…