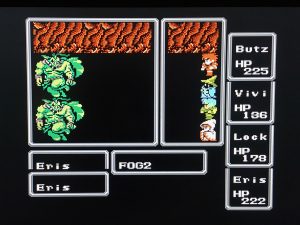 Final Fantasy, like The Legend of Zelda, lacks many of the elements that would be associated with its franchise in years to come. There are no Chocobos, Moogles, Tonberries, or Cactuars. There is an airship, but no one associated with it is named Cid. The most interesting—and sometimes irritating—absences are of game mechanics that would be introduced later, such as the Active Time Battle system and the resurrection item Phoenix Down. However, there are familiar character classes such as the White Mage and Thief, and a story centered around four elemental stones which help maintain the world’s balance.

These stones are not called Crystals in this installment, but Orbs, and your four-member party—whose names and classes are left entirely up to you—are the Light Warriors who are destined to restore them to their former glory. The first mission involves rescuing a princess, with a bit of grinding on the side, and afterward, the opening credits play. The quest to defeat the Four Fiends and save the world begins, with several necessary detours along the way. In fact, one part of the game’s first half that I didn’t like was how much backtracking there was. Several early locations have doors locked with a key which doesn’t become available until much later, and there are many fetch quests which involve traversing wide swaths of land.

The quests are more tolerable in the second half, thanks to there being greater freedom of movement due to the airship, but the already large dungeons grow even more massive and tedious. In general, Final Fantasy‘s dungeon designs have aged very poorly. They have generic layouts and contain many dead ends and empty rooms, or sometimes, rooms with empty chests. Even the most interesting floors have annoying aspects, such as unnecessarily immense rooms or unavoidable tiles of lava. Instant backtracking spells don’t become useable until the second half of the game, and even afterward, the dungeons can be annoying. Oh, and since in-dungeon save points wouldn’t be introduced into the series for another few installments, the only places to save are at inns and on the World Map. By the way, saving always costs you something, whether it’s through the use of a consumable item—a Tent, Cabin, or House, none of which is a guaranteed full heal—or a stay at an inn.

Compounding the dungeons’ tediousness is the tedium of battle. I make it no secret that the turn-based battle systems I like the best are the snappier ones—think Final Fantasy X-2, Mystery Dungeon: Shiren the Wanderer, or Bravely Default—but Final Fantasy‘s is pretty damn far from snappy. The system is Dragon Quest-style: during each turn, the player enters commands for their entire party, then watches them play out. The messages detailing battle actions as they happen take a little time to scroll off, but for the most part, it is fine for what it is. Where the battles start to become annoying is when there’s multiple enemies, up to nine, and most of them cast spells that affect your entire party. Any spell with multiple targets gets a description of what happens to each one in turn, so if, say, each enemy in a group of six casts a paralysis spell on your party, that means going through twenty-four separate messages just for those actions. Later Final Fantasies would invite criticism through their use of summon spells with elaborate animations, but I’d rather sit through a bunch of those than Final Fantasy‘s longest standard battles. 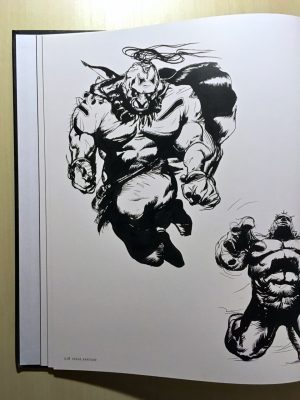 …and here is that enemy’s original illustration. From The Sky: The Art of Final Fantasy.

Another section in which Final Fantasy would show its age, and not in a good way, is in its items and inventory management. In addition to the saving-related items I previously named, healing items include Heal, a simple HP healing potion; Pure, a poison antidote; and Soft, a petrification curative, as in later games. That’s it. There are no high-level HP healers, which meant that I would often buy dozens of Heals, one at a time, before heading into massive dungeons. Also, as I mentioned before, there are no Phoenix Downs, or Phoenix Pinions, or Phoenix anything, really. If you want to revive a fallen party member, you have to go to a special healing facility (which isn’t present in every town), or use the Life or Life 2 spells, provided you’ve bought them and your white magic caster is in a suitable position to put them to use. As such, bringing downed party members back to life can be a major hassle, and is one reason why I did so much grinding early on.

As for inventory management, things get even stickier there. Key and consumable items are lumped together in one catch-all menu, which is not a big deal, but equipment is another story. Each member of your party can carry four weapons and four wearables, and whenever you buy a new piece of equipment, you’re asked which person will take it. This doesn’t mean that they’ll equip it right away; rather, they’ll hold on to it until you decide to equip it on them manually (which, by the way, doesn’t free up that slot). Each piece of equipment can also be only used by certain classes, and if you want to check on the stats of your gear, that means either referring to the spoilerific manual or going back and forth between the Weapon or Armor page and the Status one. On top of that, as each party member can wear up to four pieces of armor, any empty armor slots can get filled very quickly. Depending on what classes you choose, you many not have very much, or any, free space for additional armor, so picking up something new in a dungeon can often mean tossing away an older piece of gear, before even finding out what that new equipment even is. This character-specific approach to equipment is an interesting one, but also so flawed that I’m glad they did away with it in the later games.

On a related note, the imbalance between the different character classes is something else that should be addressed. I chose four classes for my playthrough—Fighter, White Mage, Black Mage, and Thief— and out of those, the Fighter had it the best. This character always got the best equipment and armor, especially compared to the Mages, who expectedly have weaker defensive stats and would often be the most likely to die during battle. There were also more swords available than any other type of weapon, which once again disproportionately favored my Fighter. The Mages caught up in usefulness after learning certain spells, but I’m still not quite sure what to make of the Thief, who did not have any sort of special stealing moves. Attacks for all four of these classes varied wildly in effectiveness, with crits often doing two times or more as much damage as a weaker regular hit. Balance isn’t this game’s strong suit.

What is strong, and memorable, about Final Fantasy is its atmosphere. Despite the simple 8-bit sprites, the uniqueness of Yoshitaka Amano’s design concepts shine through, especially when it comes to the monsters. The music is repetitive, but more varied than it was in Zelda, and just as catchy. On another note, navigating the world and figuring out what to do next is a bit easier than in Zelda, as there is ample in-game guidance, as scattered about as it may be sometimes. Said world doesn’t have much variety in its architecture, though it makes up for that in the numerous types of peoples that populate it; there are humans, elves, dwarves, mermaids, an ancient race that speaks a different language, and even a clan of dragons. The story is simple and not nearly as memorable as those in later games, but it gets the job done.

Despite the many issues I had with Final Fantasy, I’m glad to have seen the roots of a series I have had a long, and surprisingly persistent, relationship with. However, I can not in good faith recommend this game (or at least this warts-and-all original version, as opposed to one of the later remakes), unless you are also curious about the series’ origins. Many of the JRPGs that have followed in its footsteps since then would be better uses of your time if you’re looking for something entertaining, rather than a history lesson in game design. For a Final Fantasy that best preserves the feel of the original, but has improvements that remain palatable today, my personal recommendation is Final Fantasy V. Incidentally, that game’s main character, Bartz (or Butz in the fan translation), is who I named my Fighter after. You may have noticed that my other party members bear similar homages. Even when setting up my party in Final Fantasy, I couldn’t escape the weight of my fandom.