All entertainment mediums are strange in certain ways, but television is one of the weirdest. Since TV producers typically make their revenue from advertising, there’s pressure to get as many eyeballs as possible watching any given program; after all, the higher the ratings, the higher the ad rates can go. This leads to shows—including non-fiction ones like news broadcasts—using sensational hooks to draw viewers in, often exaggerating situations to no good effect. TV becomes a shallow caricature of regular life, but a compelling one. Such tendencies lead to oversimplified ideas, inadvertent fame, and other problems, and the smaller the community in which these things take root, the faster they spread. These problems and others are at the heart of Shin Megami Tensei: Persona 4. 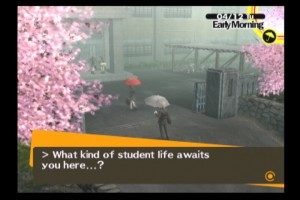 Set in a small Japanese town called Inaba, Persona 4 opens much the same way its predecessor did, with the protagonist (for the rest of the review, we’ll call him Satoru Minami, which is what I named him in-game) being introduced to the Velvet Room, where he is told that he has one year to unravel a mystery that he will soon become involved in. As Satoru gets settled in at his uncle’s house and new school, this mystery soon manifests in the form of murders that occur on foggy nights. There is also the matter of the Midnight Channel, an urban legend which claims that you can see your romantic match if you stare into a turned-off TV screen on a rainy night. It is on one such night that Satoru discovers that he can put his hand into the TV screen. This is how Satoru’s adventures in the “TV world” begin. 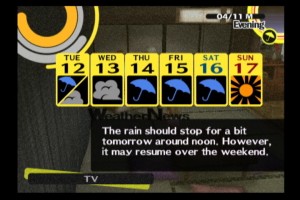 The TV world is an odd place which is perpetually foggy and overrun with aggressive beings called Shadows. It is divided into wildly different regions that exaggerate concealed personality traits and feelings, sometimes to outrageous effect. This world is where the vast majority of the RPG part of the game takes place. The battle system is a refined version of the “press-turn” ones from previous MegaTen games which, in a welcome change from Persona 3, allows Satoru to directly control his teammates during battle whenever he wishes. The Personas themselves are magical animas whose abilities can be called upon in battle; unlike the other party members, Satoru’s Persona ability is the “wild card”, which allows him to obtain, fuse together, and hold multiple Personas. Weather conditions in the real world determine if certain rare monsters will show up in the TV world on a given day, and in addition, there are “fusion forecasts” which change day to day and affect what bonuses are granted when creating new Personas in the Velvet Room.

Outside of the TV world, Satoru attends high school, and can go shopping, take on part-time jobs, read books, go out to eat, fish, do favors for people around town, and, most importantly, get to know the people around him a bit better. Forming and improving your “Social Links” with these people—a group which includes fellow party members, as well as family, classmates, coworkers, and others—leads to stronger Personas created through fusion, and unlocks other in-dungeon benefits. They are also miniature stories within the wider scope of the main one, often helping to illustrate why certain characters are the way they are, and showing how they grow and change as people. My one major regret upon reaching Persona 4‘s “good ending” was that I did not get to finish more of these tales.

Speaking of Social Links, the characterization is some of the most true-to-life that I have seen in any JRPG, including Persona 3, in some time. The characters all act their age and are clearly imperfect; this latter bit ties into a very important theme of the overarching story—self-awareness and acceptance—but is refreshing nevertheless. As for the former, the strongest example is Nanako Dojima, a normal seven year old girl without any of the precociousness that plagues so many children in JRPGs. She loves singing along with commercial jingles, thinks platypuses are awesome, and struggles with her feelings toward a workaholic dad who doesn’t have much time to devote to her. She is, in many ways, the heart of Persona 4, and ended up being my favorite character in the game. 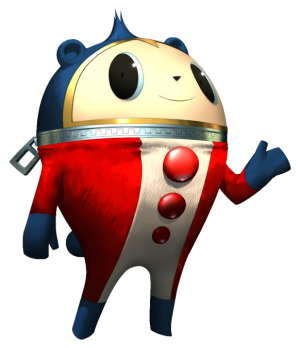 If Nanako is the heart of the game, the soul is Teddie, a cartoon-like bear in a clownish outfit who is roughly the shape of a snow cone. When you first meet him, he is the only friendly resident of the TV world, and shares some of its flamboyance through his personality. Seeing him grow, form friendships, and come to terms with his place in the grand scheme of things is fascinating to watch.

While the characters and their stories are fascinating, the major downside of Persona 4‘s storytelling, strictly from a practical perspective, are the frequently long cutscenes. Save points break these up regularly, though it can sometimes take between thirty and forty-five minutes between each one. While I had enough time blocked out to consume these scenes as they came about, this setup became problematic during the game’s single most heartwrenching event, during which a lengthy series of dialogue choices has to be gone through—choices for which the answers were not as straightforward as they might seem—in order to determine which way the story goes. Make even one mistake, and you’re put on a short path toward a bad ending. Oh, and prior to this set of choices, there’s some thirty minutes of drama, the impact of which is ultimately lessened by going through this section multiple times in order to get the “correct” answer. I’ve been told that the annoyance of this section has been lessened in the PS Vita port, Persona 4 Golden, through the addition of a save point, but I can’t confirm this myself.

Still, that’s my only major gripe about what’s otherwise a near-perfect game. The poppy soundtrack is just as wonderful as Persona 3‘s. As with many of Atlus’ PS2 games, the 3D graphics are serviceable, but the 2D ones, which include character portraits, the menus, and various comic book-like effects, are frequently inventive and always pleasing to the eye. The localization work is another outstanding Atlus USA production, but the voice acting, while good overall, is not quite up to their previous standards. Some of Chie’s lines, not to mention most of Margaret’s, are delivered in a wooden fashion, and Naoto’s battle dialogue is unnecessarily over the top. However, the voice actors for Kanji, Teddie, Nanako, and Adachi turn in excellent performances all around.

This game’s a keeper, and is one that I will likely revisit sometime in the future. Have to complete those other Social Link stories, after all.