Little Updates and Some Braincrumbs

Ever since late January, Shin Megami Tensei: Persona 4‘s been eating up most of my gaming time. I finally beat it yesterday, but am going to put off writing about it for now (and I will write about it, promise) to get some reviews out of the way. Like the previously reviewed Paper Mario: Sticker Star, these are all games which I played when I was not preoccupied with Persona 4.

Before that, though, I just want to note that the links page has been updated for a couple of friends’ sites and a Let’s Play. I also want to note that the Kickstarter for “Frog Fractions 2” is currently going on and that you should pitch in, if you haven’t already. That’s all for now, so let’s get to it…

After beating Sticker Star, it would seem odd that my next “secondary” RPG would be another one based around platformer mascot characters, but that’s what it was. Sonic Chronicles, which is perhaps most famous for being made by BioWare, is the first and only RPG in the Sonic franchise. Given the rocky history of Sonic games and the unusual choice of developer, I both wasn’t quite sure what to expect and didn’t keep my hopes up. This proved to be a wise tactic.

Sonic Chronicles follows the title hedgehog and his friends on a quest to rescue a kidnapped Knuckles from a group called the Nocturnus, and eventually, save a whole lot more. It uses some prominent bits of Sonic lore in telling its tale, and many series regulars make appearances, including Amy, Shadow, Big, and Cream. There are dialogue trees sprinkled throughout, though they don’t really affect what direction the story takes, as well as a sprinkling of humor and pop culture references (the Soundgarden one was the most out-of-left-field of the latter). Aside from some bits of dialogue that could’ve done with much tighter editing, and every single human NPC being a white male of some sort, the story works well enough, both for the Sonic universe and in general. 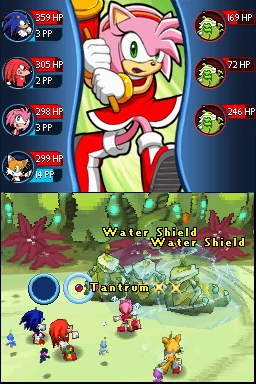 However, the game controls in exactly the way one would expect from a big-name developer who had never made a DS title before: every action requires touchscreen input, including starting the game. There are only two actions that have button-based alternatives (the field abilities and opening the menu), but if one has to use a stylus for everything else anyway, there’s no point in using anything else. This touchscreen gameplay is fine for the most part, but gets tricky when using the special POW abilities during battle, all of which require precise timing. Most POW moves will thankfully let you do at least some damage if you mess up the inputs, but healing and other support actions will fail outright in such cases. This being the case, the support characters are pretty much useless until one obtains a certain very rare Chao which lets you bypass the timed inputs—and even then, it’s not guaranteed that you’ll ever be able to get this Chao, as which ones hatch from what eggs is apparently random.

The rest of the game is a mix of polished and clunky. For example, while some of the music sounds fine, albeit generic, other pieces are dinky and an embarrassment to the franchise; one of these happens to be the only piece that I recognized as being from a previous Sonic game, a bare-bones cover of “Diamond Dust Zone, Act 1”, originally from the Genesis version of Sonic 3D Blast (what’s odd is that Richard Jacques is in the credits, presumably for this piece, when, to the best of my knowledge, it was actually written by Jun Senoue). The graphics fare better, though the 3D character models are kind of ugly when seen head-on, and the POW move icons are a bit more pixelated and jaggy than they could be. Taken as a whole, it’s an odd, quirky entry in a franchise that’s no stranger to the occasional odd, quirky entry. It might be worth a look if you’re a Sonic fan and/or into such curiosities (I fit both criteria), but it’s hard to recommend as a good RPG.

Speaking of playing similar games so close to each other, my next secondary title was a high school-based life simulator, much like the non-dungeony parts of Persona 4, but such was my mood when I started up this doujin game. Published by Capcom, localized by Nyu Media, and developed by 773, Cherry Tree High Comedy Club puts the player in the shoes of Miley, a high school student who dreams of becoming a professional comedian. To help achieve this dream, she has set out to recreate a school club that two alumni, now famous comics, were originally members of. Unfortunately, she needs a minimum of five club members in order to make it official, and she only has herself and her roommate. Thus, the goal of the game is to recruit those last three members before the deadline for new clubs closes.

The format should be familiar to anyone who has pursued Social Links in Persona 3 and/or 4: when not cultivating her knowledge of conversational topics (ranging from pets to politics) through reading or other activities, Miley talks to people around town and nurtures friendships with a specific subset of them. If she becomes close enough friends with any one of the six available candidates, they will join the club. Carrying out your search for club members day to day in this way can be repetitive after awhile, but given the format, it’s to be expected. It’s not a very long or difficult game, though some strategizing is required. I should also note that recruiting all six candidates seems to be impossible for a first playthrough; fortunately, there is a New Game Plus mode. 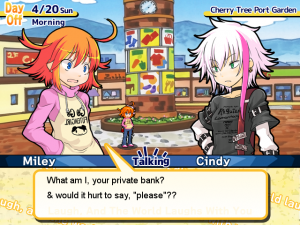 The music and story are bright and cheery, as are the graphics—save for some issues with text on characters’ clothing when their portraits are flipped—and the UI is very well designed. However, the one part of the game that stands out in a negative way is the localization. Although the writing itself is fine, typographical errors frequently appear throughout the dialogue, and I even caught a misspelled word in the user interface. It’s clear that this game would’ve greatly benefitted from a thorough round of copy editing/proofreading. Aside from that, there’s a quirk to this localization that is peculiar to Capcom-published visual novels: it’s rewritten to be set in the United States. Aside from the Westernized names, two noteworthy changes are that a certain pair of foreigners are now from Sweden instead of Canada, and the town’s shrine is explained as being a gift from Japan. Granted, this is not usually a major issue with me, but things like the shrine, not to mention the castle visible from the town’s park, are so obviously Japanese that one wonders why they even bothered with Americanization in the first place. These changes have also led me to wonder if the game itself (and by extension, worryingly, the gameplay) was altered so that there’s no school on Saturday in the English-language version, but I couldn’t find anything on 773’s site that seems to indicate this. Either way, the technically inept localization is a disappointment compared to the rest of the game, which is an enjoyable, lively diversion.

Not long after starting Miley’s adventures in club recruitment, I got The Itch and started up Hammerwatch, one of the few light-on-plot hardcore dungeon games left in my Steam backlog. It was one of the first things I had ever voted for on Greenlight, but I didn’t get around to actually picking it up until the last Steam Holiday Sale. After playing it, I’m kind of glad I didn’t pay full price.

The story is very simple: while escaping from a castle with your fellow adventurers, you alone get trapped and have to find your way out. The game is divided into four areas of three floors each. Each area has a boss, as well as minibosses, regular enemies, enemy spawn points, loot, treasure chests, traps, upgrade and potion shops, and secrets—lots of secrets. Most of these secrets take the form of hidden areas that can be found by attacking the right wall, pushing the right buttons, or solving puzzles, and lead to money, “vendor coins” (special items that lower the prices at shops), extra lives, and strange planks. Unlike most other games with such secrets, finding these goodies in Hammerwatch is practically required if one wants to make decent progress through the game. While I appreciate the focus on discovery, it seems a bit misguided to me to have so much of the game’s accessibility be dependent on what should be optional. 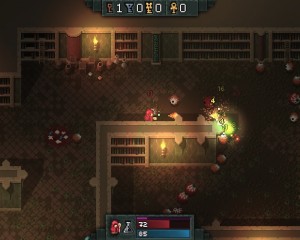 Aside from that, the castle floors are massive and very well designed, though having to go through them again and again after failed playthroughs leads to a sort of boredom settling in. As for the enemies, although some interesting things are done with them from time to time, for the most part, they’re pretty brainless, and will just swarm straight to you once you’re in their line of sight.

There are four character classes to choose from (all male, which is a bit weird), which are all well-balanced with their own distinct strengths and weaknesses. Although I tend to gravitate toward melee classes for these types of games, after trying out all the classes on the Medium difficulty, I ended up beating Hammerwatch with the wizard, whose basic fireball attack struck the right chord with me. Playing any one of the classes is an exercise in repetition, though; no matter which class I was, I found myself using very similar strategies on most of the regular enemy types throughout the game.

As far as aesthetics go, I have no major complaints aside from an iffy loop point in the background music. The options for graphics, controls, etc. are very good, although controller support is limited. Hammerwatch also has a co-op multiplayer component and modding tools, which sound promising for anyone who’s into those sorts of things. However, if you’re like me and want a solid single-player dungeon crawler first and foremost, this isn’t bad, but you could do better.