A copy of Halo sat amongst other barely or never touched PC games—stuff like American McGee’s Alice and Half-Life—for a number of years. Early in 2010, I decided to change its status, and got around to starting it on April 17th. This decision was one that I’m still feeling the effects of.

It did so many things right: consistent world design, likable characters, unique (for a first-person shooter, anyway) music, good equipment, and great momentum. There was also the big plot twist, a moment when so much seemed to change; I believe this was also the moment when I became hooked.

It’s not like the game didn’t have any problems, as it had a streak of sameness and repetition running through its many grey corridors, but as with any flawed piece of brilliance, the magic of the rest was such that they were minor concerns. 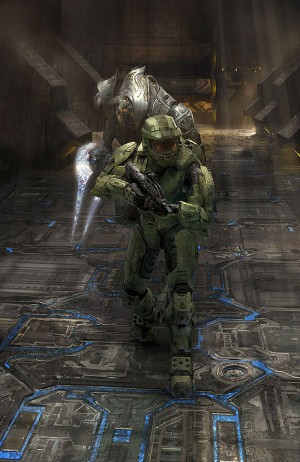 After Master Chief and Cortana’s adventure on Installation 04 came their next one, which starts in orbit above Earth. The situation had become grave, the enemies less cartoonish, and the animations a touch less snappy. Realism and gravity—in a galaxy filled with whole races of aliens that could speak perfect English, a Forerunner civilization that rivals StarCraft‘s Xel’naga in terms of crazy conundrums, and Sergeant Avery Johnson (minor spoilers in link)—was trying to worm its way into a realm that was fun and exhilarating above all else.

Although I wasn’t sure what to make of this change of tone, with it came a closer look at the Covenant and their motives, and the introduction of a new playable character, the Arbiter. This disgraced Elite was a welcome change from the UNSC’s perfect super soldier and whatever seriousness that was imbued in the story suited him quite well.

The air may have changed, but the action didn’t. In fact, the ante was upped, with dual wielding, new equippable weapons (including the truly badass Energy Swords, which were present in the first game, but not a useable option), and frantic battles. Unfortunately, the final fight, which aimed to be the pièce de résistance, fizzled instead, thanks to a shortsighted bit of level design. The ending was a cliffhanger this time, as the “trilogy” formula had now been settled upon.

The action outdoes itself again, and there are crisper graphics this time around due to this being the first Xbox 360 outing for the series. Also still present is the gravitas, with extra emphasis on Chief and Cortana’s relationship, which takes a turn away from the first game’s buddy-movie-screwball-comedy antics to something a bit more tender and weirder, with a slight whiff of retcons.

As for the rest of the plot? Muddled and nothing to write home about, with a none-too-subtle throwback to the first game at the end and some non-closure closure.

Although I’d put up with it for three installments, here is where the formula really started to wear thin. Despite being an RTS, taking place two decades before Combat Evolved, and featuring a whole new cast of characters, a familiar three-act structure was in place. It would all be eyeroll-inducing were it not the most fun I’ve had with a game in this series since pre-final battle Halo 2.

I am and remain a PC person when it comes to first-person shooters (though, as I’ve said before, the Wii’s controls for first-person games are damned good). With Halo Wars though, I found a console RTS with a control scheme that suited my style of play fairly well. It was also, sadly, Ensemble Studios’ final game.

The second in the Not-Master-Chief non-trilogy puts the player in the role of an Operational Drop Shock Trooper during the events of Halo 3. Its emptiness, coupled with basic character animations attached to equally basic characters, brought to mind the first game, more than any of those that had been made previously, albeit with a moody touch of noir on top. The story was modest and significantly different, in terms of structure, from the ones that had come before it. Perhaps the one thing I liked the most—and this is the only time it has happened in the series—is that the main character is not only nameless, but pretty much voiceless, a true silent protagonist whose UNSC-issue boots I can easily slide into. 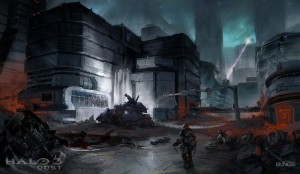 ODST is a wonderful game, but aside from the rare bit where it’s obvious you needed to have played Halo 3 first, its biggest frustration is representative of something that I’d noticed about the console Halos I’d played to this point: the save system, or rather, the lack thereof. One of the great things about modern PC games is they haven’t forgotten about the value and necessity of manual saves. Autosaves and “save and quit” features are all well and good, but not if one wants to go back and try a different approach, as I did with ODST when I realized that I was unraveling the plot’s core mystery in the wrong order. Redoing the previous mission over again, I found my acquired weapons gone and my checklist cleared of any real progress. This was why I deleted my save file and started the game over again. That said, it is unfortunate that certain other progress markers, namely the Xbox Live Achievements and the in-game audio file unlocks, could not be similarly wiped clean.

Bungie’s final Halo would have it come full circle: in the beginning of their Combat Evolved, we learn that the planet Reach, which had been colonized by humans, has fallen to the Covenant, and that Master Chief is the last of the Spartan II-class soldiers. This game, then, tells a story of the doomed right from the start; I knew going in that the Spartan I would play, and the others in Noble Team, would fail to save Reach and die. The story did have a few surprises left, though, including one which was badly explained in-game, and only clarified by reading some forum threads and the facsimile diary that was included in the game’s special editions (I have the Limited one).

Interestingly enough, although the nameless protagonist “Noble Six” was not silent this time, gender was both obvious and up for grabs: Six could be male or female. Even with an already solid range of good-to-great women characters in the Halo universe, and the existence of female Spartans having been established since at least Wars, that I could make Six any gender I wanted was a welcome surprise. I went with the male option, though.

Male or female, Six is your typical Halo human protagonist: if s/he’s not already a decorated and admired soldier, s/he has an impressive track record. Only Halo 2 stands apart in its presenting the player with a flawed protagonist in need of empathy and redemption, and even then, the Arbiter is only playable for half the game. On the other hand, Master Chief (and his sidekick Cortana), Sergeant Forge, the Rookie, and Noble Six are characters who had admiration and/or respect on their sides prior to their in-game adventures, and could be considered canonical Mary Sues.

Although I have enjoyed my time with all of them, I continue to love the Arbiter the most.

After a month-long binge on the not-Master-Chief non-trilogy, I am done for awhile. Anniversary, a remake of the original Halo: Combat Evolved, sits in my backlog, and there it will remain for awhile longer, mainly since there are virtual worlds I want to delve into that do not involve space marines. Halo 4 will come out later this year, but unless there’s a real must-have preorder bonus, I won’t pay full price for it. I don’t go in for the multiplayer on these games, otherwise I would certainly have my order in already, and $60 for what will surely be another eight-hour (or, heaven forbid, shorter) campaign is too much.

I do plan on buying and playing it, however. Despite whatever gripes I may have, Halo still has that special something.