Forging Through the Backlog

February was a productive month, gaming-wise. After completing Tropico 4‘s campaign, I went ahead and played On the Rain-Slick Precipice of Darkness, Episode Two, which was more of the same Penny Arcade-themed adventuring, albeit with a gimmicky end boss. There was something of a cliffhanger at the end, though, and given that Episode Three was cancelled, I would have to rely on Penny Arcade’s own documents should I wish to know the rest of the story. (ETA: Pete has informed me that Zeboyd is working on Episode 3. Huzzah!)

I also took up Pokemon White again, where, among other things, I added the last three Gym Badges to my collection. There was also a handful of new story events to play through, where Team Plasma continued in their quest to free Pokemon everywhere from trainer oppression. Compared to past Pokemon enemy squads, Team Plasma is easier to empathize with, though no more or less devoted to their cause. Their leader, the enigmatic N, is certainly the most memorable such character that I’ve yet seen in the series. Although I’ve set the game aside again, largely for practical reasons (Pokemon White has a season-based system that uses the DS’ internal clock, and I haven’t seen Winter or Spring yet), I’m looking forward to taking on Victory Road and the Pokemon League.

Tropico 4 was also revisited, much earlier than I thought I would. This time, it was to play the first two DLC missions. The one contained in the “Junta Military” pack was quite challenging, while the “Plantador” mission had a thick streak of humor, with its pop-culture friendly occult theme. In between all of this, I made a lot of progress in Sonic Colors, finally beating it on the 28th. It remains a wonderful Sonic, and simply a great platformer in general.

After all that was wrapped up, I decided to go back to the Halo franchise with the next game in the series, Halo Wars. I was already familiar with developer Ensemble Studios’ work through Age of Empires II, and therefore expected good things from what wound up being their final game. Thanks to Halo Wars‘ interesting missions and marvelous control scheme, I wasn’t disappointed. By necessity, it’s a lot simpler than PC RTSes, but far from dull; it’s probably the most fun I’ve had with a Halo game since the original. Sadly, the campaign was over fairly quickly, but on the plus side, it gave me my last beaten game of the month. 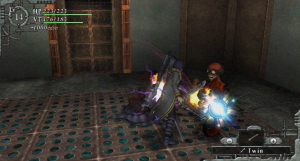 The PS2 port of Baroque was decided upon as my next game, and the first one for March. I started it yesterday and played for the better part of the afternoon, but decided to drop it in the end. It’s a roguelike, but with action, as opposed to turn-based, gameplay, which is unusual for the genre. Nevertheless, it has roguelike-style difficulty, complete with randomly-generated dungeons and being booted back to the starting area at Level 1 every time you die. I died quite a bit early on, but made progress at a steady pace, and then, not very long after starting over yet again, I came across the Experience Wings.

The Experience Wings are a piece of equipment that boost the amount of experience points one can get from each defeated monster. Needless to say, they make level grinding much easier, lessening the pain I felt just on Normal difficulty. However, after going through several floors, I play through a story event that sends me back to the beginning, at Level 1. After making it so that the Experience Wings can be carried over to this new session, I do it all again, though it’s much more monotonous this time, and the same thing happens. While reading some info about the game afterward, I found that progression is determined not by what floor of the dungeon you make it to, but whether or not you can fulfill the arbitrary and oftentimes vaguely hinted-at goals given to you by the macabre, dull, and badly voice-acted NPCs. Upon learning this, I could readily envision the tediousness this would entail, and promptly decided to give it up.

So, what’s on the agenda next? As I said before, I’m on hiatus from Pokemon White again; also, I don’t think we’ll be tackling Final Fantasy Crystal Chronicles‘ tough endgame again anytime soon. Right now, my plan is to continue on with more Halo games I haven’t played yet, namely Halo 3: ODST and Halo: Reach. I also have Halo: Combat Evolved Anniversary in my backlog, which I’d like to play co-op, but that’s not as big a priority. I also want to start another JRPG, though I haven’t settled on which one yet. Tales of the Abyss, perhaps?

How many games will I beat in March? Stay tuned…

Special Stage: Congrats once again to my friend and fellow Citadeler Tarale on her recent engagement! The incredibly geeky story of how she proposed to her boyfriend, via Team Fortress 2 and with some special help from Valve, made Kotaku Australia; here’s the story!