Running concurrently (and adjacent to) PAX Prime was Halo Fest, a tenth anniversary celebration of all things Halo, and admission was free to PAX attendees. Although I had initially intended to avoid Halo Fest since I’m still new to the franchise, my curiosity got the better of me, and we found ourselves lining up by its entrance on Sunday morning. It was a longer line than I had expected, and though there were a couple of inconsiderate smokers upwind, the wait wasn’t bad. A guy in a Halo: Reach costume walked down the line shortly before the doors opened; at first, I thought he was a cosplayer, but soon realized that his presence here was official. 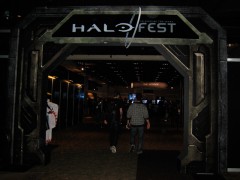 Acting on a tip from a PAX East exhibitor (some of the tabletop gaming companies were in the same wing of the convention center), upon entering Halo Fest, we circled around and picked up swag bags, each with a limited-edition Warthog Mega Bloks set included. From there, a quick trip to the Halo merchandise store was made for a couple of the things in the Part Zero pic. After I got all the goodies I wanted, it was now time to take in the event itself.

There were several little areas set up, each devoted to something different. Many of them were devoted to specific multiplayer modes, and there was also a small stage set up for Halo-related panels and presentations.

Near the entrance was a wall filled with images of fan-made tenth anniversary maps made in the map editor Forge. Some of these maps were really neat; my favorite is probably the one which contains an outline portrait of Master Chief made entirely of weapons. 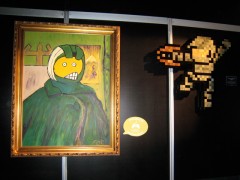 Around the corner from the Forge screenshots were two pieces of artwork, a Van Gogh parody painted for the annual Child’s Play auction, and a wooden mashup of Mega Man and Master Chief. The same area held a glass case with recent and upcoming Halo action figures from Square Enix Products. Two of these Play Arts Kai were red and blue Halo: Reach figures originally released as San Diego Comic Con exclusives, and available for purchase at this event as well. The other two items on display were the upcoming Halo Anniversary Play Arts Kai, one of which—the silver Spartan Mark V—is slated to be a New York Comic Con exclusive. If you’d like to see these figures in more detail, I’ve posted additional pics of them on Tsuki Board (a shot of the Deus Ex: Human Revolution Play Arts that were shown, but not sold, in the Expo Hall is also in that set). 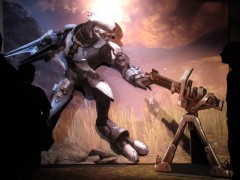 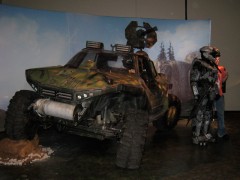 Scattered throughout the area were several sculptures and other displays: there were 1/1 scale statues of Halo: Reach characters, Mega Bloks versions of Master Chief and robotic flake 343 Guilty Spark (which, unfortunately, I had forgotten to get a picture of), a diorama of a battle scene, a photo area where you could get a picture of yourself gunning down a Covenant Elite, and a life-size, working Warthog built by Weta. It’s pretty much impossible to make out in the picture shown here, but on the front window by the driver’s side are little silhouette stickers marking units killed; in a bit of black humor, the top row included a couple of children and an old lady pushing a walker.

There isn’t much left to say about Halo Fest. Like the costumed guy outside, others milled about in Spartan gear, posing for pictures, and there was also an information booth of sorts, at which was an old Halo 2 promotional statue. Available at this booth were Halo Fest schedules, an issue of Official Xbox Magazine with articles about the series’ anniversary, and a couple of exclusive Halo-themed 360 avatar items (a Cortana Chip and an Energy Sword), among other things. Once we were done taking in all things Halo, a brief escalator ride brought us back to PAX’s Expo Hall.

In our next and final installment: remember that awesome Gordon Freeman cosplay I mentioned in Part Zero? Well, there will be that, and more!