One of my biggest regrets of PAX East 2010 was not taking very many pictures, especially of the cosplayers. Fortunately, and with the help of a few people at deviantART, I managed to find photos of many of my favorites. This time around, I did not want to repeat this mistake.

To start things out, here’s my favorite cosplay of the show, which I had teased in earlier posts: Gordon Freeman from Half-Life. Despite its simplicity (not to mention the somewhat slapdash application of the Black Mesa patch), it succeeds in two important areas: the cosplayer’s resemblance to the original character, and their creative approach. This Gordon went around PAX all weekend carrying a large display that humorously promoted Black Mesa; titled “Black Mesa Community Outreach and Hiring”, it included a special message from Dr. Breen, a list of civilian projects that involved upstanding partners such as Umbrella Corporation and Abstergo, a partially redacted hiring notice, and a section about famed curtain manufacturer Aperture Science. Overall, an inspired and funny cosplay. 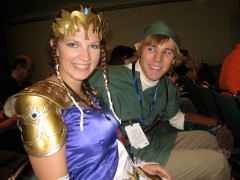 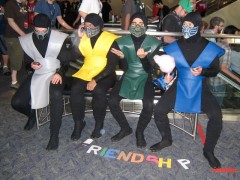 Other cosplayers I saw over the weekend included Princess Zelda and Link, whom I sat next to during the marketing panel; a four-person Mortal Kombat II team consisting of Smoke, Scorpion, Reptile, and Sub-Zero; a White Mage, a Black Mage, and Aeris; two of Quote from Cave Story (the second of which is pictured here); and a Draenei from World of WarCraft.

Aside from the expected video game cosplays, there were a few distintively non-game ones. For example, over the weekend I saw The Tick and Arthur, as well as the Bimbettes from Disney’s Beauty and the Beast (pictured). Crossplay, or cross-dressing cosplay, was also present at the show. There was a female Quote (the first Quote I had seen), a male Chell, and most memorably, a male Misty, shown here. 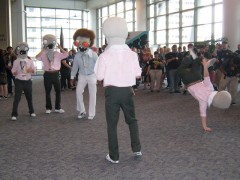 Of course, there were a few people dressed in costume who were not cosplayers, but actually on the job. Aside from the Halo: Reach characters at Halo Fest (see Part Three), there was a female Shepard at the Mass Effect 3 booth and a Plants vs. Zombies group made up of Disco Zombie and his backup dancers.

Still, even though I had managed to take many more photos this time around, there were some cosplays that I missed out on. Aside from those I’ve already shown and/or mentioned, I also saw Cirno (Touhou series); Bayonetta; an Enforcer dressed as Chun-Li; a yellow and black Heartless and other Kingdom Hearts series characters; Vanille (FFXIII); Frank West (Dead Rising) in boxers and a Servbot head; Catherine and one or two Vincents (Catherine); Princess Peach; at least a couple of Marios, another Link, and a Dark Link; and what I believe may have been an Alchemist from Torchlight. There were others besides, but I can’t think of them all right now. 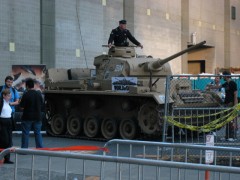 Cosplay aside, there are several other, smaller things to mention about the weekend. As at PAX East, the longer lines were made more interesting by the Cookie Brigade and what entertainment the Enforcers had on hand. Across the street from the Paramount Theater (aka the “Main Theater”), a tank was parked in a vacant lot as a part of the promotion for World of Tanks. The Paramount itself is gorgeous inside, with high ceilings, fancy gilded detailing, and an overall feeling of grandeur.

We didn’t spend any time in the Queue Room this go round—save for a brief trip in and out to get the official swag bags, we didn’t have to. At this PAX, they experimented with letting people queue up wherever they wanted before the doors opened; this approach, while not perfect, worked out okay.

While in line, we would sometimes chat with people; at the Friday concert, it was with a couple who we had been in line with earlier that day. I also managed to meet up with some fellow Cheap Ass Gamers during PAX, and we all went out to dinner at a nearby Gordon Biersch on the Sunday night after the final round of the Omegathon (and a brief Child of Eden session in the Console Freeplay room), where the topics of discussion included cars and corpses, import figures, multiplayer gaming, and CAG itself.

What else is left to mention? We hit up the Gameworks across the street the night before PAX started and checked out (but didn’t play) the wide variety of arcade machines there, including some recent Japanese imports, such as a motion-activated rhythm game by Konami (not sure if it’s a Bemani game, technically) and a ride-on version of Initial D Version 3. On the first day of the show, I noticed a shrinkwrapped Jim Darkmagic portrait prominently displayed at the official PAX/Penny Arcade store. One of the stores in the Expo Hall (which I wish I could remember the name of) had these cool Portal 2 rubber keychains that I have not seen since. Another store sold anime merchandise, many of which were bootlegs. In the Tabletop areas, one of the card games really stood out from the rest: the anime-styled, maid-heavy Tanto Cuore. And, as you may have heard elsewhere, PAX scalping was taken to a whole new level with the presence of counterfeit passes.

So, in conclusion, it was an incredibly fun weekend, and we’re looking forward to doing it again next year. To all the people who made this event so awesome: thank you. Finally, if your cosplay is posted here, please let me know! I’d love to give you credit.