As someone who doesn’t/can’t/won’t attend E3, one of the best parts of the annual event is the swag auctions that crop up on eBay. The tchotchkes placed on sale are neat little windows onto the expo, inherently different from the avalanche of news reports, written impressions, screenshots, trailers, and press conference livestreams that are available to anyone and everyone with a decent internet connection. They are trinkets that were actually there, instant collectables that show how an industry markets itself to itself, and to the world at large, in physical form. 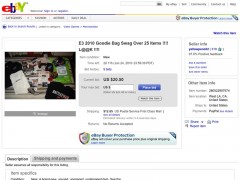 The E3 goodies on eBay traditionally take many different forms. Every year, without fail, there’s at least one auction for the daily magazines/guides for the event itself. There are also always auctions for t-shirts, as well as lots containing a variety of items; the latter listings are very hard to find after E3 has come and gone. Other common items that appear year after year include lanyards, magazines, keychains, and, for some reason, Square Enix catalogs.

Other items are more on the quirky side. One of my favorites this year—and not just because I love the character and the franchise—are the patches that were given away to promote Kirby’s Epic Yarn. How better to promote a fabric-themed Kirby game than with a fabric Kirby? Several of these patches, with a Buy it Now (BIN) of $9.95, sold quickly, and at least one that has gone up since then as a regular auction is hitting an even higher price. I thought the initial $9.95 BIN listing was a bit high, but I’m a born cheapskate, and now I’m wondering if I should’ve bit before that same seller doubled their price.

Another item of note this year is the Epic Mickey cloisonne pin. Not only is there a huge Disneyana collecting scene, but there is a subset of Disneyana collecting that specializes in pins. Throw in video game memorabilia collectors on top of that, and you wind up with BIN asking prices as high as $24.99 for these pins. A search of completed listings has revealed that only three of these pins has sold so far, which makes me think that the highest of these BINs are too optimistic.

Two bits of Natsume swag have caught my attention. First is the Harvest Moon: Grand Bazaar plush horse. Since Natsume typically gives away plushes as preorder bonuses, I think we’ll be seeing this specific item again, on a wider scale, in the future. More unusual is this catalog for Natsume’s games. Again, I believe this to be an overly optimistic BIN. Meanwhile, one enterprising auctioneer has combined the two into one lot.

Some things which could become scarce in the years ahead are the Sonic Colors plush and the two Portal 2 t-shirts. There haven’t been many posted, which is always an interesting sign. The Dreamcast shirts are a little bit more common, but seem to be quite popular. And then there’s the Zelda shirts, of which there are a ton, but might also become nice collector’s pieces, given the size of fanbase and the popularity of past Zelda-related swag of all kinds.

Some general shopping tips: swag traditionally starts hitting eBay on the first day of E3, and BINs, if utilized, trend toward the high end. Both starting prices and selection generally improve toward the end of the event and in the days afterward, but bidding can be fierce. Even so, during and after E3 is the absolute best time to get one’s hands on a piece of swag that might be rare down the line. Please note that it’s sometimes hard to know what will be valuable, even for the most seasoned collector; as with any other type of collecting, it is always best to go after the pieces you personally like the most.

In the months and years following an E3, it will, naturally, be harder to track down many items on eBay or other auction sites. However, when older E3 stuff does pop up, it can sometimes be had at a relative bargain, since there isn’t nearly as much competition. Here are the results I got for “E3 2009” in the Entertainment Memorabilia category, which contained the most number of relevant results. Slim pickings, to be sure, but I bet that Left 4 Dead 2 poster was going for a lot more last summer. It should be interesting to see what an “E3 2010” search brings up a year from now.