This afternoon, I’ll be boarding a plane to California for a personal trip. What this means is that, for the past week or so, I’ve been tying up some loose ends beforehand, so I wouldn’t have to deal with them when I got back. The usual errands notwithstanding, this has meant returning to the final, postgame stratum of Etrian Odyssey. 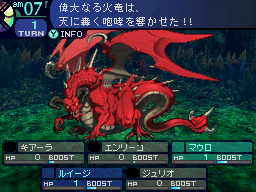 One of the monsters I didn't fight.

I had originally begun tackling it last year, immediately after beating the main quest. Unfortunately, the most advantageous stat boosts required me to restart with new characters at Level 1, and thus, a lot of grinding was required. I took up the grind again earlier this month, and eventually maxed out the five stat-enhanced characters I had created way back when at Level 70. When my party was strong enough to venture into that last stratum again, around Level 60 or so, I began mapping it out thoroughly, finding it an even more devious bastard than the snippets I had seen last year. In the end, I never got through the whole thing due to some insanely tough bosses that I would’ve had to have defeated. Still, I’m glad that I got as far as I did, even though I had to spam the items and abilities that cut down on random encounters after maxing out my party and building up my cash hoard, as fighting monsters was a waste of time by that point.

In general, the plan was to be “done” with Etrian Odyssey so I wouldn’t have to take it along with me, but I also wanted something new to play on this trip, since Pokemon Platinum by itself would get a little boring after awhile. Thus, I ordered Might & Magic: Clash of Heroes, which I’ve had an eye on ever since its release. (It’s also, I believe, the first Ubisoft-published title I’ve bought since Grandia II for the Dreamcast, which says more about my tastes than the company’s games.) Yeah, another RPG, but with more of a strategy and puzzle bent from what I understand. I’m looking forward to playing it.

I also picked up the issue of Edge that’s currently on the US newsstands, because that’s what I do nowadays before a long trip. It’s the June issue with Little Big Planet 2 on the cover. I wouldn’t be surprised if I have every Edge cover appearance of LBP by this point, but I also wouldn’t be surprised if I’m missing one or two. Something interesting I’ve heard about LBP2 is that the gravity is adjustable, which might mitigate my one major turn off from the first game: the floaty animation. You can bet I got sick of seeing all those Edge covers (and stories) real fast after seeing the original LBP in motion for the first time…

Anyway, that’s all for now. See you again in a little over a week!