The Continuing Adventures of Adol Christin

My first experience with the Ys series was last year, when I downloaded and played the TurboGrafx version of Ys Book I & II via Virtual Console. I found the game to have its share of quirks, but overall, an enjoyable experience. Much the same can also be said of Ys: The Ark of Napishtim, the sixth game in the series (for simplicity’s sake, I’ll be referring to it as Ys VI from here on in). Like other games in the series, Ys VI has appeared on multiple platforms. It was originally a 2003 PC game. Two years later, it was ported to the PS2; a year after that, the PSP; and a mobile version is currently in the works. This review is of the PS2 version.

As in previous Ys games, the hero of the story is the red-haired adventurer Adol Christin. This time around he boards a pirate ship, only to fall overboard during an attack on the open sea. He winds up in the Canaan Islands, a land cut off from all others by the surrounding Great Vortex, where he meets the Rehdan priestesses Olha and Isha. The story goes from there, and although there are references to people and events from past Ys games, playing them is not a prerequisite, as the main tale in Ys VI stands well enough on its own. 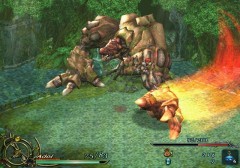 The bosses are impressive, in that particular Ys fashion.

Ys VI certainly shows its age. Textures are lush, but the tiling is obvious on an place like a field. FMVs are similarly lush, but have a similar so-obvious-that-it’s-CG sheen, and the character models in these movies range from tolerable (Adol) to hideous (Olha and Isha). Its status as a port is also clear from the slight jaggies on some of the still anime character art—especially on the brusque bishonen Geis—which would be perfect on a game developed specifically for the PS2. Animation is simple, and many of the characters don’t do much other than rotate their entire bodies, if they move at all. The soundtrack goes all over the place; most of it is all right, but there’s also a badly-executed techno track and on the opposite end, a boss battle theme that is Ys music at its finest. As for the non-musical sounds, the omnipresent voice acting isn’t very good (to put it kindly), some of the sound effects are similarly weak, and the mix is uneven at times.

However, all of this is mainly window dressing. The real meat of Ys VI lies in its dungeon crawling and hack-n-slashery. Adol, the one and only playable character in the game, has a set of quick moves and attacks, as do his foes, making grinding a fast-paced, enjoyable experience. Aside from one particularly tricky jump, all of his moves and abilities are easy enough to pull off, and (fortunately, as the default setup is a bit odd) the controls are completely customizable. Among your usual bits of equipment are three special swords that Adol obtains during the course of the game, each one with a different moveset and elemental magic ability. Each of these swords can be swapped in on the fly without having to go to a menu screen, a feature that makes otherwise plain battles more interesting. As for the enemies, a good variety of them can be fought, and the bosses in particular make for fun, and sometimes tough, battles. And though finding out where to go next in the story can be a little tricky at times, and there is a fair of backtracking, moving from place to place doesn’t take very long, and the larger dungeons can be easily escaped from by using a certain key item. All in all, the battle system and exploration aspects of Ys VI are quite enjoyable, and any potentially tedious parts are made to be as brief as possible.

Ys VI is one of those games that is not for everyone. The graphics and sound are those of a low-budget game with high-budget aspirations—a description which is certainly apt here. Also, though there are a few sidequests and hidden areas to explore, the game is fairly short, which might put off those RPG players who like lengthier experiences. However, the action is meaty, often challenging, and a lot of fun. Gamers who are willing to forgive the game’s aesthetic missteps could certainly find a lot to like here.