Back to the Future!

Last weekend I was away, and brought DS games Etrian Odyssey and Retro Game Challenge with me, with the intent of starting them. I never did touch either of them, and while Etrian Odyssey remains unplayed, I did start the latter today.

A little introduction first: for those not in the know, Retro Game Challenge is the US title for Game Center CX: Arino’s Challenge. It is based on a popular Japanese show titled Game Center CX, which features a regular segment where host Shinya Arino plays an old video game, typically a hard one. These segments are filled with nail-biting moments, strategizing, and lots of humor. A company called StyleJam showed two of these segments, translated into English under the title Retro Game Master, at last year’s New York Asian Film Festival to gauge interest in possible US DVD releases, but so far, nothing has panned out. 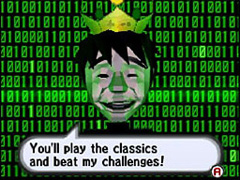 Though I’d heard of the show before, these screenings (which featured Mystery of Atlantis and Ghosts ‘n Goblins) were my first real introduction to Game Center CX. I loved them, and when news came around of a localized version of the well-received Game Center CX: Arino’s Challenge, I put it on my wish list, and eventually picked it up.

The premise of Retro Game Challenge is a silly one. Arino, looking like a demented version of Dr. Kawashima, sends the player back to his ’80s childhood. To return home, the player must complete a series of, you guessed it, retro game challenges. The games are all original, but resemble those which came out for the Famicom/NES back in the day. So far, I’ve played a Galaga-style space shooter and a puzzle-action game where the main character is a robot ninja, and now I’m working through the challenges for Rally King, a top-down racing game. I like old school racers, but tend to suck at them, and this is no exception.

To help the player get through the challenges, kid!Arino will obtain the latest issues of GameFan (no, not that GameFan) which contain not only previews and reviews of new titles, but tips and tricks for ones that have already been released. Although I loathe using cheat codes and other shortcuts nowadays, it’s less painful for me in this retro construct. After all, I remember as a kid hearing about how to get to the Warp Pipes in Super Mario Bros., among other tricks. As far as I’m concerned, GameFan‘s tips are just another throwback.

Speaking of the game mags, they contain some of Retro Game Challenge’s more tongue-in-cheek bits of humor. In addition to reviews and tips, the basic content of these mags consists of hype, top sales lists, and even a letters section and editorial (penned early on by “Dan Sock”, one of many parodies of/homages to real-life game journalists). Along with the occasional bits of Engrish in the games themselves, and Kawashima!Arino and kid!Arino’s banter, the overall effect is a charming and sometimes silly setting that would put a smile on any retro gamer’s face.

So yes, I’m having fun, and it’s very good so far. Now to beat the rest of the Rally King challenges…

Special Stage: Ray Barnholt’s Game Center CX Episode Guide at Crunk Games is a great introduction to the TV series. Be forewarned that the episode synopses contain spoilers (and yes, fansubs do exist). There’s also a sequel to the DS game which includes fake 16-bit titles, but unfortunately, there’s little chance of it leaving Japan.