Last week was a quiet one, gaming-wise. I beat Digital Devil Saga, as I’d intended, and though the final boss was a bitch to beat, the ending has me very much looking forward to its sequel. I intend to start that sometime this week. The only other game I played to any extent was Billy Hatcher and the Giant Egg. It was the only non-RPG left in my console/handheld backlog and I needed to break things up a bit, so I popped it in the Wii yesterday. 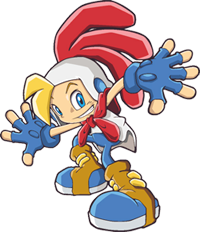 Right now, there isn’t much to say except that it’s most certainly a Sonic Team game, and not in a good way. While the Sonic Team-developed 3D Sonic games since the Dreamcast era have been rightfully derided for their sometimes imprecise controls and cameras from hell, the non-Sonics that the team has made have generally ranged from pretty good to really good, and have included the likes of Chu Chu Rocket, Samba de Amigo, and Phantasy Star Online. Thus, I went in giving Giant Egg the benefit of the doubt. That, and the game has a kickass soundtrack, which I’d purchased and started listening to a long time ago after hearing some tracks on the now-defunct Gaming FM.

Giant Egg turns out to have many of the same problems that have plagued the Sonics, and some unique to the game. The camera can be player controlled, and is fine most of the time, but is frequently too close to the action during fights against larger enemies. The platforming is a little flaky when trying to be precise, and double jumping while holding eggs is especially annoying when the platform is a narrow one on top of a crate.

Speaking of the egg holding: the main mechanic of the game involves rolling, growing, and generally manipulating eggs. To start rolling an egg, one need only approach it. However, this simple approach backfires whenever Billy loses control of an egg by falling off a short ledge or doing a quick turn. There’s also been a few times when I bound up to a high place using a device that requires a held egg and said egg reaches the top safely without Billy, which means I have to run around to find another egg and try it again. This annoyance over the egg control isn’t restricted to wanting to roll, as not wanting to can be just frustrating. For instance, one level required me to stand on top of an egg by jumping on it, which ended up being harder than it sounds. The game also grades you, using the total time elapsed per level as one of the metrics. With the fidgety controls and sometimes hard-to-reach collectables, my average score so far has been a low one.

What’s most annoying is the part I’m stuck on now, in one of the mandatory levels. It’s a pirate-themed one, and my task here is to aim a cannon and shoot myself out of it to reach the next round of platforming. One of the locals even gives me a tip when I talk to them (which reminds me; it seems that Billy can’t talk to characters without letting go of the egg), telling me to aim just slightly above a certain flag. I try doing this many times, and always end up drowning in the water over and beyond my target. Talk about your cheap deaths. I eventually gave up for the evening and started plowing through one of the postgame challenges in Chocobo’s Dungeon instead.

So in general, it’s okay (and the soundtrack is still great), but I’m not too crazy about the aspects which have carried over from Sonic Team’s more annoying works. That’s pretty much all for now; this week, I’ll start Digital Devil Saga 2, and maybe Final Fantasy Crystal Chronicles with my husband. I’m also looking into getting more cheap non-RPGs for my console backlog; Klonoa: Dream Champ Tournament and the original Ratchet & Clank are two that I’m looking at. Anyone have other recommendations? WiiWare/Virtual Console recs are fair game as well, since I got a 2000 Nintendo Points card for my birthday and have 200 spare points sitting on the Wii itself. I’m setting aside most of the points for World of Goo, but have no idea what to do with the rest right now.