I have much I want to talk about: Halo and its classic FPS horror aspects, the marvelous life story contained within Dragon Quest V, the StarCraft II beta in general (ayup), recent game music purchases and trades, PAX East remnants, and so on, but for now, some complaints and observations about specific video game magazine articles.

END_OF_DOCUMENT_TOKEN_TO_BE_REPLACED

For the past week, I’ve mainly been playing Samurai Legend Musashi, a PS2 action RPG from a few years back. Overall, it’s fairly average, but despite the simple battle system and other, smaller issues, it’s a fun game and I’m enjoying it. 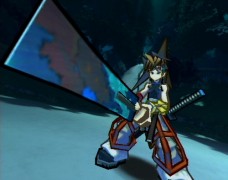 Not too short, not too long, but just right.

This might sound odd, but one of the things which attracted me to the game in the first place was its length. In reviews, I’d read that it was fairly short for an RPG, and indeed, I’m getting near the end now and am somewhere around the fifteen-hour mark. Your modern JRPG (turn-based, action, or strategy) clocks in at an average of fifty hours if one includes any required grinding and a sidequest or two; going for full completion typically takes much longer, and often requires going past the hundred-hour mark. That Musashi offers a complete action RPG experience in a length that was adequate in the 16-bit era is certainly not a negative, especially for a genre fan like me who only has so much time to devote to gaming.

I don’t think Samurai Legend Musashi’s length should’ve been a negative factor in reviews (which it certainly was in some of them) unless the story felt rushed or inadequately told. On the contrary, the story in Musashi is simple and fits the overall length very well, and though I’ve yet to beat the game, I haven’t seen anything that would indicate a less-than-satisfactory ending. And that brings me to today’s topic: some things I would like to see listed separately in reviews that shouldn’t be considered as a positive or negative within the review itself unless there’s a very good reason.

First off, average game length. If a game leaves one wanting more, I can understand that. However, lambasting (or praising) a game simply because it’s a certain length is pretty silly. This is especially true of modern RPG reviews, where the general consensus seems to be, “the longer, the better.” I understand there’s a cost/value consideration, especially when it comes to pricey but short actioners a la God of War, but this is one area where I feel that it’s best for the readers to decide for themselves, as not everyone has the same amount of leisure time to devote to games. The only site I visit on a regular basis which tends to list length separately is RPGamer; I’d love to know of others.

Speaking of RPGamer, they do the same with difficulty. Not all gamers sport the same level of skill, and thus, as with game length, one size does not fit all. Slamming a game because it’s “too easy” doesn’t do it or its potential audience much favors. Again, there are exceptions, the biggest one being the accounting of difficulty/learning curves, which is something I always want to know about when reading reviews. Otherwise, readers should be told up front, without further judgement, how easy or hard a reviewer found a game to be.

The last major one is the manufacturer’s suggested retail price—in American dollars, euros, yen, Microsoft points, whatever. Now more than ever, games vary wildly in price, from free browser-based titles to pricey special edition versions of big-budget console releases. As previously implied, pricing can be tied in with average length, as there’s a “cost per hour” metric which some gamers like to account for, but only some of them. Listing the price up front, but not commenting on it unless there’s a damn good reason, is something I’d like to see in a lot more reviews.

There are some other separate factors that may also be considered. One of these is genre, another is potentially objectionable material (something which the parent-oriented sites, as well as mainstream sources like the New York Times, tend to cover). In general, though, these three represent what I feel are the most important variables that separate gamers: how much time they would like to spend on a single game, how much (or little) of a challenge they prefer, and how much money they are willing to drop.