There hasn’t been all that much going on with me lately, gaming-wise. Since my last post, I beat Etrian Odyssey and began delving into the postgame stratum, a set of floors with some especially tough monsters. As they approached or hit the level cap of 70, I knocked each member of my main party (a Landsknecht, a Dark Hunter, a Medic, a Survivalist, and a Troubadour) back ten levels for the privilege of being able to reassign their skill points. Then, I decided to retire them and start over with their apprentices back at level 1, taking advantage of certain stat benefits. With this new party, I’ve plowed through some of the optional quests I never took on, including what has to be the single most tedious one in the game. They’re now in their 40s, level-wise, but it will still be awhile before I can enter that postgame stratum again without worrying about being annihilated. As one can imagine, this grinding has become rather tedious, and thus, it’s since replaced Planet Puzzle League as my mainstay “laundry day game”. 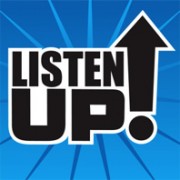 I’ve also taken to listening to the game’s sound on laundry days as well, which I never did with PPL. When playing the latter, my headphones would instead be hooked up to a crusty old iPod Mini loaded with episodes of Listen UP. I listened to their last-ever show in two sessions (three hours makes for a long podcast), the second being on Monday, as I folded my laundry (as opposed to washing and folding). I can’t recall exactly when I first started listening to 1UP Yours—sometime last spring, I think—but I loved both it and its successor, Four Guys One Up Listen UP, and downloaded the latest episode every week. Now there’s no more Whacha’ Been Playin?, John’s iPhone Game of the Week, Four Minute Warning, “weekend confirmed”, or “we are ghost”, but despite the team’s separation (with Garnett now at Shacknews, John gone to GamePro, and David still at 1UP), new, separate podcasts are being promised (and maybe with at least a couple of those old elements intact, as hinted at in the last episode?). Looking forward to whatever you guys come up with, and thanks for all the great shows. Also, congrats to Garnett for finally starting Yakuza 2!

What else has been going on lately? Well, I’ve been trying to stick to a daily routine in Wii Fit Plus. The “My Wii Fit Plus” feature is a fantastic addition to the regular Wii Fit formula, and there are a handful of other tweaks and additions that I like as well, most particularly the routines. One thing that’s particularly annoying, though, is the lack of drag-and-drop flexibility in the Custom Routine feature (I think this problem might also plague the pre-set routines, or rather, the part in which you can string many of said routines together, but I haven’t fiddled around with that enough to know if that is the case). If I want to add a new exercise to my routine, I can’t simply place it wherever I want. Instead, it automatically gets tacked on to the end. Therefore, if I want my exercises in a different order, I have to delete them and reset the whole routine. If there’s something I’m overlooking and drag-and-drop can be done, please let me know. Anyway, despite that and other nitpicky flaws, it’s still a great upgrade from Wii Fit, especially for $20.

There’s also been Tales of Legendia, which I beat back in September. I’ve finally went back to it this past weekend to start the Character Quests in earnest. I’m only a few hours into them, and so far, they’re very cutscene heavy, but all right. Even though much is familiar, the monsters are now tougher, several features that weren’t available to me in the main game are now, and there’s a certain change in my party’s makeup (which might be kind of spoilery, so this is all I’ll say about it). Though I’m enjoying them, I hope that these quests don’t take too long to get through; my backlog is still fairly big, and I need to whittle it down before getting certain games I’ve been holding off on buying. It’s the classic hardcore gamer’s dilemma: too many good games and not enough time to play them.

Oh, and one last thing: registration has begun for PAX East (via). I’m going; are you?

The Game After the Game

I haven’t started up a new JRPG since beating Digital Devil Saga 2—mainly because of certain real-life obligations that I had been putting off and needed to take care of. That’s not to say I haven’t been gaming. Along with some Planet Puzzle League and DDR, I completed Wario Land, getting all of the treasures (and the best ending) for the first time, and have been slowly progressing through Klonoa 2: Dream Champ Tournament. Also, most recently, I’ve gone back to Final Fantasy Fables: Chocobo’s Dungeon.

Comments Off on The Game After the Game