After okamiblog’s closure, the WordPress install was repurposed into Brain Scrap House. okamiblog itself was promptly archived at the Blue Shinra Project. I have decided to shift the archive (and its introductory section) here, where the original posts had long been hidden. Since these posts have been converted into WP-style “pages”, the originals’ categories and tags can now be found at the bottom of their respective pages. 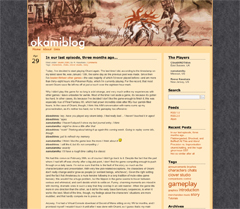 okamiblog, formerly located at okamiblog.blueshinra.com, was a project conducted by CloudANDTidus, namatamiku, and myself, wherein we would all play the Capcom/Clover Studio cult favorite Okami simultaneously. This approach had its share of problems—the most damning of which would prove to be the game itself.

What follows is an archive of all of okamiblog’s posts, from the very first to the very last, with the original comments preserved where applicable. Please note that some posts contain spoilers.