Before all of that happened, I managed to wrap up FUSER, and play through The Haunted Island, a Frog Detective Game and Kingdom Rush, all on PC. Kingdom Rush is very much a product of its time: a polished and occasionally difficult tower defense game with an irrelevant story and a smattering of pop culture references. It’s good and lives up to its reputation, but feels weirdly dated for a game which is only seven years old. After beating the campaign, I tried to play a little more, but the challenge levels’ difficulty ranges between hard and ridiculous, and I didn’t like the game enough to struggle through them.

The 2020 release FUSER is a wholly different experience. Often compared to Harmonix’ previous card/mobile game DropMix, FUSER is a mashup fiesta where popular songs are broken down into discrete chunks (vocals, guitars, etc.) which can be recombined in countless ways. The campaign is basically an extended tutorial and, thanks to specific goals plus a heavy emphasis on beat-matching, a great way to create some real garbage mixes. However, given how many features there are to learn about—muting, soloing, BPM adjustment, effects, and more—it’s a good way to get acclimated to the game. Outside of the campaign, there’s a freestyle mode and a regular schedule of online events. Additional songs can be slow to unlock, and the DLC is pricey considering that you aren’t even getting full tracks, just snippets of them, but the latter has long been an issue with Harmonix games, thanks to the cost of music licensing. I am generally very picky when it comes to rhythm games, but not only is this one fairly forgiving, it is also about so much more than robotically matching the beat. I’d like to be able to dive back into it once I can sit at a computer desk again.

Also in my future plans is playing through Frog Detective 2 on the desktop, since it makes my poor MacBook Air chug something fierce. I played through the first Frog Detective adventure, The Haunted Island, nearly a month ago, before starting Kingdom Rush and finishing FUSER‘s campaign. It’s short and silly, and while it features some typically wacky adventure game-style solutions, the writing is straightforward, so there’s not much guesswork involved. In this way, it seems to be both a send-up of old-school point-and-click adventures and a modernization of them. It’s the perfect game for someone like me, who likes the genre but doesn’t love it, and has little to no patience for bad logic. 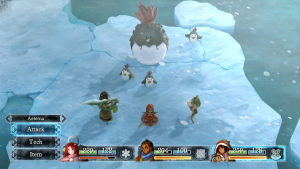 Elsewhere, I started I Am Setsuna, my first console/handheld game for the year, in early February. It was also the first physical game I imported for the Switch—it’s long been digital-only in North America—which was later followed by a handful of others. I’m certainly happy that after the region-locked 3DS line, there’s once again a Nintendo handheld where I can play games released in any region, and the increasing range in the types of Japanese games being localized is another blessing.

If only I Am Setsuna was a better game. The developers count Chrono Trigger as an influence, which is most obvious in Setsuna‘s encounter and battle systems. Enemies are readily visible, and mostly avoidable, in dungeons and are completely absent from the world map, and there’s a familiar combo system, as well as some new battle features which are a little more complicated. A couple other Chrono Trigger-style elements surface later on, but they’re spoilers, so that’s all I’ll say about those. The characters are all fairly distinct and the snowy world and piano soundtrack help make for a unique setting. The plot is your standard JRPG fare, which concerns heroine Setsuna’s sacrificial pilgrimage to give the world a respite from monster attacks.

Where Setsuna stumbles is in its smaller design decisions. Instead of money, enemies generally drop materials, most of which can be used for crafting spells and abilities. There are dozens upon dozens of these items, and trading them in to the Magic Consortium one type at a time can get tedious after a particularly long dungeon crawl. The Consortium’s menu of abilities to choose from is even more unwieldy. Pretty much every type of ability is available from each Consortium outpost, even those that require items that can only be found much later on, and having to scroll through them all in order to find any you don’t have yet is a pain. Some degree of restriction, such as that which can be found in the weapon shops (which, in contrast, only sell the latest and greatest available at those points in the story), would’ve been welcome. There’s also a food crafting system, which requires hunting down recipes. However, the player is given no hint as to what NPC might have a certain recipe until all of the ingredients are already in their inventory. A little change such as a recipe-holding NPC dropping a hint as to what they need would’ve taken some of the guesswork out of this aspect. In terms of combat, my biggest complaint is the difficulty curve; after a certain point, the game requires several hours of grinding in order to beat bosses. 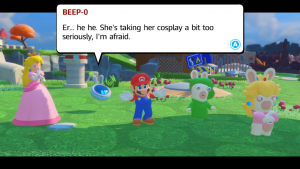 The issue with my leg started while I was playing Setsuna, and as it hadn’t improved much by the time I beat it, I started another Switch game. Wanting something a little lighter, that next title would be Mario + Rabbids: Kingdom Battle, an X-COM-style strategy RPG pairing Mario with the crude and cheeky Rabbids originally from the Rayman franchise. Although I care for neither Rayman nor the Rabbids, I found this game to be one of the most fun I’ve played so far this year.

The plot’s setup is a little complicated, but not the rest that follows. The basic gist of it is that the worlds of Mario and the Rabbids have collided, and our heroes have to find the one who holds the key to containing the chaos. These heroes include Mario, Luigi, Princess Peach, and Yoshi, along with Rabbid versions of the same, but most of their foes consist of antagonistic Rabbids. Each of the game’s four worlds is laden with colorful scenery and collectible-filled chests, along with the maps where the heroes use cartoonish guns, hammers, bombs, and special moves in turn-based battles. There are a few odd bugs in World 4, but otherwise, this Ubisoft game is as good as your average Mario spinoff published by Nintendo, which is to say that it’s very good indeed.

Thanks to the publisher/developer being European, Mario + Rabbids also has a different feel from other such spinoffs. Some of the enemies have a Nordic appearance, with hulking Viking-like Rabbids and armored Valkyries; others are reminiscent of British punks. In the ghostly World 3, some North American flavor is apparent with enemies at least partially inspired by Creole and Mexican culture. Combined with the strategy RPG gameplay, all of this makes for a unique experience that I haven’t seen in the Mario franchise before.

I’m currently playing through the postgame challenges in Mario + Rabbids, which I hope to be done with today. The next game on my agenda is Level 5’s Ni no Kuni: Wrath of the White Witch. I had bought the collector’s edition, and even did an unboxing blog post, then promptly filed the game away into my backlog… eight years ago. It’s well past time I played it.