Tales of Tales (and Other Games)

We’re now just past the midpoint of 2018, and although I’ve met my personal gaming goal for this year, my Backloggery progress index is in the negative, thanks largely to some Switch pickups (and a gift), and the usual Steam Summer Sale. I’ve been playing a little bit of everything—action and turn-based JRPGs, indie puzzle and adventure games, and a couple of newer entries in long-running franchises—but there’s always too much good stuff out there to catch up on.

My major gaming goals these past couple of months were to beat Etrian Odyssey V: Beyond the Myth and play through Tales of Vesperia. Despite a generic setup for the final boss battle (which, on the plus side, had awesome music), the former game was excellent—it’s easily one of the best, if not the best, in the core series. There was none of the overworld stuff that was first introduced in the third game and padded out the fourth (and most boring) entry. Instead, Etrian V is a straight-up dungeon crawl through the massive tree Yggdrasil, much like the first two games. That’s not to say this back-to-basics approach didn’t include any new elements, the best of which is the addition of in-dungeon food gathering and cooking, which gives one more options for healing and lessens the need to warp back to town whenever health and standard support items run low. On top of that, each dungeon strata’s gimmicks are novel, the story is quite good, and the mapmaking and other series hallmarks are as fine-tuned as they’ve ever been, including in the postgame, which is still tough as balls. This dungeon crawler fan highly recommends it.

As for that second goal, it was a special one. Tales of Vesperia was the longest game I had left in my Xbox 360 backlog, if one doesn’t count Forza Motosport 2, which I have no intention of finishing. It was also the last Tales game I had in my backlog, the penultimate one being the underrated fanservice romp Tales of Symphonia: Dawn of the New World, which I played last year. Finally, Vesperia is the last Tales game I intend to play. After ten years and five games, including these last two, I’ve decided that I don’t like Tales RPGs enough to continue playing them. It doesn’t help that I’m currently way behind in the main series—at least five entries have come out that I haven’t played—but a more pressing issue is that I just don’t enjoy the gameplay all that much. I find the battle system to be more button-mashy and less fun than other action RPGs, and aside from certain types of puzzle-focused areas, the dungeon designs aren’t all that inspiring, and too often require backtracking. Tales’ stories and characters tend to be decent, but they aren’t enough to get me to stick with the series.

Vesperia ended up being one of the weaker entries I’ve played. The cast was typical for a Tales, though it mixed things up a bit and had the most insufferable playable character be the oldest, instead of the youngest, or a mascot. Even so, this older character, Raven, was mostly all right, and only annoying in that he constantly felt the need to remind you of how old he was (he’s also momentarily annoying for plot-related reasons, but that involves spoilers, so I won’t get into it). The youngest, Karol, is actually one of the most thoughtful and interesting party members. However, since he is voiced by the same actress who played Emil in NieR, at first, I couldn’t help but think of that better game whenever Karol opened his mouth. 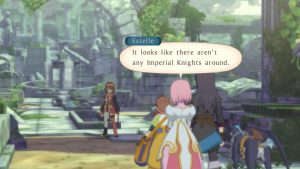 The rest of the playable cast is fairly well-rounded: a kind and well-read noblewoman; a haughty young genius with a girl-crush on said noble; a straight-talking, though secretive, member of a minority group; a loyal yet somewhat aloof dog. Their leader is Yuri, a young man with strong convictions, plus an arrogant streak which gives him a dark edge not seen too often in JRPG heroes. Providing a contrast to him is his best friend Flynn, who shares Yuri’s strong sense of justice but has chosen to work within the system, rather than outside of it. The story begins with a stolen magical core and eventually expands into your typical save-the-world plot, though the path it takes to get there not only has less of the fantasy racism I’ve come to expect from Tales tales, but is also sloppier than usual.

Also sub-par this time around is the battle system. There’s the usual mix of special attacks, items, and so forth, but I felt that the AI controls for your party members were too limited this time around. The difficulty is higher than I’d come to expect from this series, especially early on, though it’s worth noting that this was the first Tales to feature leveling up DLC. The dungeons are not only as bland as they’ve ever been, but some of them are also too big and sprawling, which only increases the amount of backtracking that has to be done. This goes triple for the final dungeon, in which it’s very easy to spend an hour exploring before so much as seeing the next save point, and unlike in Etrian V and many other modern JRPGs, there’s no temp save option. On that note, there’s also the aspects of the game that not only show its age, but were dated even back when it was released in 2008, the healing/support item limit of fifteen for each type being chief among them. Having to run out of the endgame dungeon right before the final boss (thankfully, a shortcut became available at that point) just so I can go to a town and max out my healing gels is ridiculous. There were some parts of Vesperia I enjoyed, most of which were related to character interactions or the lovely graphics, but in the end, yeah, I think I’m okay with giving up on the Tales series. 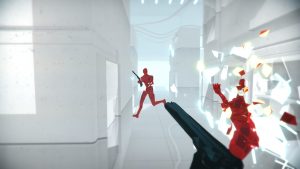 In non-JRPG news, I played through a few indie games, which all ranged from good to great. SUPERHOT was a stylish, challenging puzzle-shooter, with a framing device that made me nostalgic for my early years as a netizen. Runic’s swan song Hob was a gorgeous Zelda-style adventure. I found the metroidvania Axiom Verge to be an impressive achievement—it’s one of those “made by one person” games—though it also requires such exacting precision at times that I’m starting to wonder if I’m getting too old for this sort of thing. Arguably, the best of this bunch was Gorogoa, a brief but captivating narrative puzzle game about a boy and a monster. It’s unlike anything I’ve played before, and definitely worth experiencing.

Right now, I’m mainly devoting my time to two games. The first is Dariusburst: Chronicle Saviours, the most recent entry in the long-running horizontal shmup series Darius. This is my first experience with this series, which seems to be best-known for its aquatic-themed enemies and multi-monitor arcade screens. The latter of these is an option in the PC version’s “AC Mode”, but as it would be a pain for me to set up, I haven’t tried it out (yet?). I’m playing through CS Mode and it’s fun so far, though a little repetitive in the same way that career modes in racing games are. That said, I might eventually drop this down to a “play occasionally” title.

The second game is Front Mission Evolved. Unlike Darius, I’m pretty familiar with the Front Mission universe, having played three of the core SRPG entries in the franchise. Once upon a time, I also tried out its first action title, a run-and-gun shooter titled Front Mission: Gun Hazard, but found the cutscenes to be so long—which is saying something for this series—and the level designs so dull that I set it aside and never went back to it, though I’ve always meant to. Front Mission Evolved is another action game, and it’s a third-person shooter this time. This is a genre I’ve never really taken to—it’s why I never played Vanquish after trying the demo, for example—but fortunately, Evolved is manageable enough. 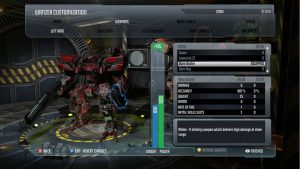 It’s also sufficiently Front Missiony. The single-minded protagonist reminds me a little of the worst FM character, the lead from Front Mission 3, but is thankfully not as bad so far. Familiar terms abound (the UCS! The OCU! Huffman Island!) as do beloved Wanzer models (Zephyr! Frost!). The Wanzers themselves are as customizable as anything in the core games, and striking the right balance between offensive power, defense, weight, and price remains a concern. In fact, they may be too customizable this time. Each of the four main component types has four color options—a primary, a secondary, and two trim—and, thanks to a PC-style picker, literally millions of colors to choose from. Fortunately, there’s a way to choose these colors once for your Wanzer as a whole, though it isn’t obvious at first. At least the camo options aren’t as insane.

That’s about everything on the gaming end of things. I’ve also been swamped in manga even more than usual, but perhaps I’ll save writing about that for another day. Some quick highlights, amongst others: the end of Princess Jellyfish, the first half of the original Captain Harlock (in a lovely hardcover omnibus, to boot), the shounen-ai two-shot Seven Days, and the weird blend of ultra-violence, cultural education, and food porn that is Golden Kamuy. I wish I could go into more detail, but all I’ll say right now is that depending on your particular tastes, most anything I’ve been reading lately is worth checking out. We’re living in a golden age of English-translated manga, and I only wish I could read more of it.

Some quick site business: As you may have noticed, I’ve tweaked the site’s design, which included adding some features that should make Brainscraps easier to read on mobile devices. One of these changes is that, starting from this post, only the first paragraph or two of each entry will be visible on the main page, which should help make it look neater. I also added a cookie notification pop-up and privacy policy a little while ago in order to be GDPR compliant, and updated the Links page. If you notice any problems with these changes, please let me know and I’ll do my best to fix them.