You might have noticed that I didn’t put together a “Manga Selections” roundup for this past year, like I did for 2016. This is mainly because so much of what was on that list would only be repeated. However, I’m considering doing one for 2018, as since then, I’ve finished—or am close to finishing—a handful of series.

That said, I’ve been itching to try some new stuff. This continues to be a great time for English-translated manga, with many new titles coming out on a regular basis. I recently tried a bunch, all of which made their English-language debut in 2017 or 2018, and have reviewed some of them below.

These reviews account for only about half of the new books I’ve read so far this year. Two of the others—the one-shot orange -future- and the first volume of the ongoing Battle Angel Alita: Mars Chronicle—are continuations of previous series, and excellent ones at that. Another pair, the first volumes of Hatsune Miku: Future Delivery and Neon Genesis Evangelion: Legend of the Piko Piko Middle School Students, are middling media tie-ins. What remains in these reviews are the original titles, which have nothing carried over from previous manga series or franchises. Any one of them should be accessible for those looking for something new. 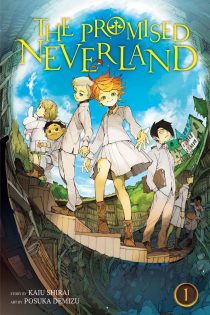 Although it’s the newest critical darling from Weekly Shounen Jump, this series didn’t quite click with me. The premise, laid out in the first chapter, is solid: a group of kids at a lively, yet unsettlingly weird, orphanage accidentally discover the horrible truth about what happens to them when they leave for new homes. This truth is frightening and fantastical, and lends itself to many questions. However, the rest of the volume consists of plodding suspense and small, sometimes bland, revelations about the orphans’ circumstances.

The orphanage itself is mostly dull and it doesn’t help that the plot suggests that any true excitement lies beyond its borders, a world which we barely get a glimpse of. The three main characters, who strongly resemble the heroines of Magic Knight Rayearth in their personalities, make plans and toss off theories at a regular pace; however, there’s little that foils or contradicts them so far, which lessens the tension. Aside from the fact that this is a non-romantic Jump series with a female lead, the most interesting character is the orphans’ caretaker, whose side of the story is teased every now and again, making it clear that she knows much more than she’s letting on.

The Promised Neverland has clearly set itself up to be a slow-burn cat-and-mouse tale of mystery and escape, but neither the setting nor the cast are engaging enough to want me to get the next volume right away. Perhaps the most disappointing aspect of this series is that Posuka Demizu’s talents seem wasted here. I picked up her artbook, Pone, last summer, and her strongest works in that are detailed fantasy worlds filled with objects. She’s not as good with characters, but this is a very character-driven series. In a more suitable artist’s hands, perhaps I might’ve wound up liking this first volume more than I did.

If you want to check out The Promised Neverland for yourself, the first three chapters are currently available for free on Viz’s website. 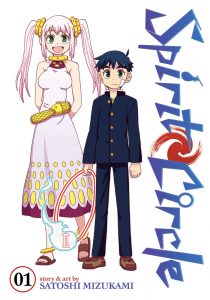 In a completely different turn of events from The Promised Neverland, I liked the first volume of Spirit Circle much more than I expected. The mangaka’s previous series, Lucifer and the Biscuit Hammer, was enjoyable enough, but going by this first volume alone, Spirit Circle is shaping up to be even better.

Middle-schooler Fuuta can see ghosts, a power which annoys him more than anything else. He is fascinated by the pretty new girl in school, Ishigami, who has a spirit companion named East. As it turns out, Ishigami has carried a serious grudge against Fuuta through several previous lives, which the latter begins to become aware of.

I haven’t read many stories about reincarnation, and, after reading some other reviews of this volume, was afraid that this one might be too complicated to follow, but my fears proved unfounded. This tale is expertly told, with the transitions between past and present handled smoothly. Also, the characters are extremely relatable and believable, which makes getting into the story that much easier. There’s not much more I want to say about this, in part because I don’t want to accidentally give something away, save for the fact that I can’t wait until the next volume. 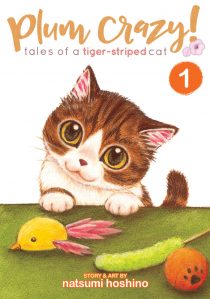 And now we’re back to a series that I wanted to enjoy more than I actually did. Plum Crazy! is a slice of life cat manga that is currently up to an astounding seventeen volumes in Japan. However, even with the cat-centric premise, it turns out that I am still rather picky when it comes to the slice of life genre.

In this series, a cat named Plum lives with an ordinary high school student and his airheaded dance teacher mother. One day, Plum finds and rescues a tiny kitten, whom the family later names Snowball. However, this kitten does not get along with Plum much at all. In fact, Snowball has a habit of biting Plum to relieve stress.

So, we have two cats—one cute but dour, and one cute but bratty—and a small cast of mildly amusing humans. Their misadventures include one where Plum follows the son to school, and another where Snowball starts chewing on wool clothing. These stories are okay, but don’t have that special spark that is required for the best slice of life manga. On top of that, I have mixed feelings about how Plum and Snowball sometimes test the boundaries of “real” cat behavior, mainly in their interactions with their human companions. Overall, this first volume was an enjoyable read, but I don’t see any compelling reason to continue. 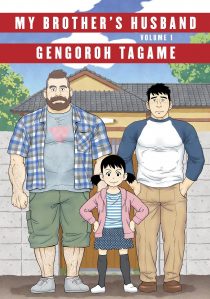 The most recent first volume I read turned out to be the best of the bunch. My Brother’s Husband is an intimate, heart-wrenching snapshot of LGBT life in Japan, and is masterfully crafted to boot. The story starts when a single father, Yaichi, receives an unusual houseguest: a Canadian named Mike whom he’s meeting for the first time. Mike is the widow of Yaichi’s twin brother, Ryoji, who had recently died back in Canada. He stays with Yaichi and his young daughter Kana, getting to know both them and the town that Ryoji had left behind.

Yaichi clearly has mixed feelings about Mike, and the late Ryoji, and wrestles with them throughout the volume. He does his best to be a good host, but has trouble fully accepting Mike, and, as a result, starts to reexamine his relationship to his twin. Kana, on the other hand, does not share her dad’s ingrained prejudices, and loves that she has a Canadian uncle (in part because “Canada” sounds a little like “Kana”). As the story goes on, other characters start to appear, some more accepting of Mike than others. Meanwhile, Mike’s visit doubles as a mourning process for him, and through certain sad scenes, the reader gets a real sense of how much Ryoji meant to him.

Tagame has been creating manga for decades, and it shows. The artwork is crisp and expressive, and the panels flow together smoothly, with a deliberate pacing that’s appropriate for this sort of real-life drama. Pantheon’s presentation—a Chip Kidd-designed hardcover with dust jacket—is suitably outstanding. This first book collects volumes one and two of the Japanese edition, and the second and final omnibus is due out in September of this year. It may be worth it to wait until then to pick up both volumes, but at the same time, this is exactly the sort of high-quality, groundbreaking manga that should be supported. Either way, My Brother’s Husband is well worth reading.