We got back from a long, relaxing weekend jaunt yesterday, and although I didn’t touch any games other than a few Picross 3D Round 2 puzzles (which I really shouldn’t have done; I was dead tired), my husband did get back into The Legend of Zelda: Skyward Sword, including a frustrating boss battle near the end of the evening’s session.

He has a love-hate relationship with the main Zelda series, much as I do with the main Mario one. It wasn’t all that long ago that I gave up on Super Mario Galaxy 2 (and, by extension, my husband as well, since he was in the “co-star” role), thanks to a badly-implemented 3D camera and a “helper” feature that felt more like cheating or the game taking pity on me than anything else. Perhaps more crucially, Galaxy 2 started feeling more like an obligation than something fun. Experiences like that are why I largely stick to the kart racers and RPGs when it comes to anything involving Mario. As for Zelda, well, it may be a long time before Breath of the Wild or any other new-to-us 3D entry in that series comes into this household. I will likely continue on with the rare 2D Zelda, but certain archaic quirks of the 3D ones continues to baffle both my husband as a player and myself as a spectator. The lag we’ve probably suffered with and the frequently convoluted and/or uncomfortable controls have also not helped these Wii games’ cases.

Anyway, on to this post’s mini-reviews. I recently played through three short indie PC games, none of which is quite like the other. The first is a pop-culture-laden pixel-art RPG, the second is a 3D moe action-platformer, and the third is an arty 2D puzzle-platformer. 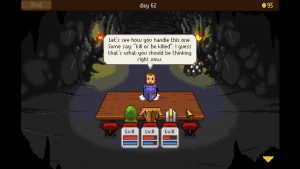 This is one of a few games I received last year by trading Steam keys, and was not one that I’d ever had on any wishlist. Still, after looking up some info, Knights of Pen and Paper +1 Edition sounded interesting enough, so I completed the trade and added it to my library. In the end, it proved itself to be not a bad little game at all.

The premise is fairly simple: a pen and paper role-playing game is played out amidst the fantasy backdrops described by the dungeon master, complete with JRPG-style turn-based battling. Like far too many indie games with pixel graphics, there’s a ton of pop-culture references, but they’re easier to tolerate given that the story begins with a group of regular people in the “real” world. On top of that, while several references range from predictable (Doctor Who‘s Tardis) to insufferable (Monty Python and the Holy Grail‘s Knights of Ni), some are unexpected and even enjoyable; for example, though I disliked Chrono Cross, I appreciated KoPP‘s take on one of its most annoying elements.

The story itself is your standard JRPG fare with an appropriate twist or two, though told with a sometimes clunky English localization (Behold Studios is based in Brazil). The game also doesn’t explain some of its mechanics very well, if at all. On the plus side, the battle system is solid, with some nice variety between classes, and the difficulty curve is decent, though I did find myself having to grind a bit in one of the earlier sections. Aside from the inspired setting, it’s not a particularly remarkable game, but it is fun. 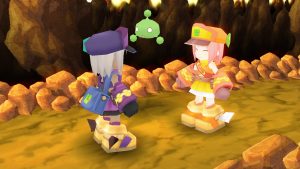 Speaking of clunky localizations, Angel Express, also known as Tokkyu Tenshi, suffers a bit in its own way. During cutscenes with the player-named protagonist and her spirit partner El, there are often lines which seem like they should be said by the other character. This makes for some very odd dialogue at times, though most of the cutscenes are incidental and the core story is simple enough to follow. It’s worth noting that Angel Express is the first English-translated game by Japanese doujinsoft circle EasyGameStation not to have been localized by Carpe Fulgur, and, unfortunately, publisher Rockin’ Android just doesn’t do as good of a job.

As for the game itself, Angel Express is a platformer with a racing theme attached: individual stages are obstacle courses which are run through thrice at a time, and usually with a time limit attached or other characters to out-score. In addition to the repetition of the stages themselves, to reach the end of the story means going through most of them multiple times—and happening upon certain cutscenes multiple times as well. The stages are generally well designed and fun to play, so I didn’t mind too much, but it was still somewhat disappointing that there wasn’t more variety. Oh, and Angel Express is extremely difficult on “Normal”, so much so that I couldn’t beat the second part of the first stage on that setting. I ended up restarting and playing through the whole rest of the game on Easy, which is no slouch either.

There are a few additional features and modes, including a level designer, time trials, and multiplayer, though I didn’t touch any of that. I did check out “Totten News”, an in-game newsletter for delivery girls that includes gameplay tips as well as fictional features one might find in a real-life periodical, like recipes and horoscopes. Unfortunately, the last issue of Totten News suffers from a bug which makes it unreadable, so I’ll likely never find out how its serialized story, about two sisters in an alternate world, ends. 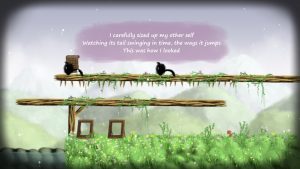 Incidentally, the last game in this Braincrumbs installment was also apparently made by a non-native English speaker, but has the best localization of the three, though one or two sections of text don’t linger on the screen long enough to read at a normal pace. The story being told here, though, is not as cheery as the previous two games’ are.

In I and Me, the player controls two identical black cats simultaneously, guiding them past hazards and lining them up perfectly so that they fit into a pair of picture frames somewhere else on the screen. It’s a lot like Toki Tori and similar character-based puzzle games, though controlling two characters like this requires a whole other set of skills, mainly a keen spatial awareness. It’s a challenging game, but fair, and the dozens of stages are cleverly designed.

As for the game’s tone, which I hinted at before, it is perhaps best described as melancholy. The story, such as it is, explores what it’s like to have “another self” in relation to being alone; the graphics make heavy use of black; and the music, much of it in the form of classical arrangements, complement the other moody elements very well. A handful of I and Me‘s Steam reviews describe it as “relaxing”, but it rarely fits that definition. Instead, it requires a bit of tolerance for a less colorful setting, as well as a certain degree of patience given the difficulty of a fair number of its puzzles.

Speaking of which, by the time I had gotten through about ninety percent of the levels, I and Me had finally gotten so hard that I skipped one of them. The next level happened to contain the credits. I still wonder if that specific level was the credits all along, or if some other sort of design was at work.

Some quick site business: It took a year, but I finally got rid of the “comments” links that were at the bottoms of posts on the main page.