As I mentioned in my previous post, I’ve been trying to devote my weekends to playing through at least one indie game. I’ve stuck with that through April, though two of the games I played this month are, while made by small teams, technically not indie: the first is the most famous title from a storied Western developer, and the other, though lesser-known, is by one of Japan’s most celebrated makers of all-ages visual novels. Also, I didn’t actually start the former game during the weekend, but I digress. Without any further ado, here are those games for the month of April 2016, indie or not, weekend or not. 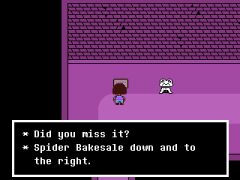 Undertale starts off twee, but becomes more substantial later on.

So it seems that there’s some meat behind the hype after all. Beyond the memes and fanart-friendly skeletons lies a deconstruction of RPGs, specifically Japanese-style console RPGs, and the various tropes that inhabit them. The central conceit is an encounter system that allows, and encourages, the player not to attack their foe, but instead to communicate with them before showing mercy. This affects the directions that the story can go in, and certain future interactions with the subterranean world in which the game takes place.

The tone throughout much of Undertale is contemporary and humorous, with some nods to otaku subculture in particular, plus a few (and thankfully, only a few) fourth-wall breaking moments and overt references to other games. Undertale‘s most obvious antecedent is Earthbound, another story centered around a child on an unexpected journey, but fortunately, it has none of its spiritual predecessor’s blatant patronization nor its interface and inventory flaws. Cave Story seems to be another inspiration, in part due to the underground setting and relatable characters, as well as the MegaTen series, via its comparatively simple conversation system. However, it’s impossible to truly say “it’s like (blah) crossed with (blah)” in regards to Undertale; as a complete package, there’s nothing else quite like it. I highly recommend this odd yet rewarding indie morsel, and also that new players go in knowing as little about it as possible. 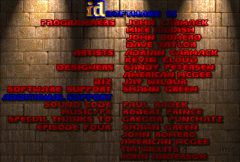 Many modern indies don’t have teams this small!

Doom requires little introduction. Before the term “first-person shooter” became the norm, it ushered in the era of “Doom clones”, and has been made to run on anything and everything, including within itself. I got my first tastes of Doom and its predecessor Wolfenstein 3D back around ’93 and/or ’94, and it has held a special place in my heart ever since. However, I had never actually beaten the original Doom. Wanting to rectify this, and too tired at the time to play anything with a deep plot, I installed the “BFG Edition” of Doom 3 and fired up that oldie. It holds up, and then some.

Doom‘s sprawling, labyrinthine levels are, save for one or two badly-implemented sections, still some of the best ever made; the enemies have a good range of toughness and attack types; and the weapons all feel right. Also, despite Doom‘s dated controls—for example, horizontal-only mouselook and no jumping—they never feel limiting thanks to some smart design. The fourth episode, which was made sometime after the completion of the main three, is more unbalanced than the others, but the blemishes that it adds to the whole are minor. By the way, the story, which involves a space marine and a portal to Hell, is as silly a bit of fluff as ever. 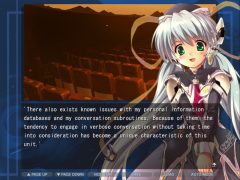 Yumemi’s excuse for her chattiness boils down to buggy software.

For all of the talk about “walking simulators”, an older genre which is often more limiting when it comes to player interaction is visual novels. An even more restrictive form is the kinetic novel, which is like a VN but completely linear, with no decisions to be made and a single ending. This term originates from the developer Key, which is, appropriately, the maker of planetarian, my introduction to this sub-genre.

planetarian takes place is a post-apocalyptic world upon which pours an endless, poisonous rain. The nameless protagonist, a manly tsundere scavenger, comes across a well-preserved planetarium, maintained by an android named Hoshino Yumemi. She is a waifu-candidate type of moe character: unfailingly positive, eager to please, and with quirks intended to cross the line from annoying to charming. Key is famous for their sentimental stories, and in that respect, planetarian does not disappoint; the middle chapters in particular are a highlight. However, I found the melodrama to be mawkish at times, and the repetition of certain story beats didn’t seem to work as well as they would in a serialized format. Despite these issues, a handful of typos and some peculiar grammatical choices, and the rare bit of thesaurus porn (for example, “demesne”, which was used metaphorically), the story and localization were all right, but nothing truly special. On the whole, planetarian has some charms, but is most definitely not for everyone. At least I can say that I’ve experienced a Key visual novel now.

So far, Never Alone is one of the best-looking games I’ve played all year.

My final weekend game for this month was also the shortest. Never Alone, along with its DLC “Foxtales”, is a fairly straightforward platformer based on Native Alaskan folklore. The player characters are an Iñupiat girl and an arctic fox. A single player can easily control both of them, though there is a co-op mode as well.

The stories themselves, about an endless blizzard and a journey across water, are imaginative in a way that isn’t unexpected for traditional tales, and are more than suitable for a video game. Much of the puzzle-platforming is dependent on cued changes in the environment. While this works well enough in some sections, it feels slightly less so elsewhere, and some instances of clipping and slightly jerky animation don’t help. The checkpointing is fairly good, though, so there’s few frustrations to be had. I also must make note of the unlockable “Cultural Insight” videos, mini-documentaries about the Iñupiat people that are relevant to the game; as they provide a great deal of context about the game, they are worth checking out. It’s a well thought-out little game, despite its few flaws.

So, that about covers this month. I also played plenty of Diablo III and Bravely Default this month, and am currently nearing the ends of both of those; I’ve also recently started a replay of Doom II. As for what May will bring, I may cut back on the Weekend Indies for awhile and concentrate more on the longer games I have backlogged. We’ll see how it goes.