Comfort Food and Other Consumables

Bravely Default, which I finally, finally started playing about a week ago, has struck me so far as being a very different sort of JRPG, but also, more obviously, very familiar. The online/StreetPass features of this 3DS exclusive reminds me quite a bit of the Pokemon series, but also of Square Enix’s earlier The World Ends with You. The latter, which is one of my favorite JRPGs of all time, has a pin-based battle system, and some of the rarer pins could only be obtained by using certain online features of the DS. As this sort of thing is not up my alley (you could say I’m a purist when it comes to single-player games), I pretty much ignored Mingle Mode and managed just fine without it. Bravely‘s online features, on the other hand, get shoved in your face pretty frequently, at least early on, mixed in as they are with the rest of the tutorials. One of the biggest online components is a town-rebuilding minigame, progress in which is marked in real time—reminiscent of certain mobile phone sims—and dependent on how many other players you have registered within the game. Also prominent is the ability to summon special attacks from another player during any battle. Anyway, all this online stuff is both understandable, given the times, and, thankfully, largely ignorable, at least so far. I’m getting by just fine on my one default worker working on the town minigame while I plug away at the rest.

This “rest” is where the familiarity comes in. The story takes place in a world where nature’s balance is maintained by four elemental crystals, which are now in trouble. If that by itself doesn’t scream Final Fantasy, there’s also the job system with its familiar classes, the items like Eye Drops and Phoenix Downs, the Akihiko Yoshida character designs, and the rousing score. There is enough different that it is not a complete clone of that older series, such as the hand-drawn look of the towns and the modest tone of the storytelling. This is particularly true when it comes to the game’s battle system, which, Final Fantasy V-style jobs aside, resembles those found in Dragon Quest and MegaTen titles more than FF’s. Its resemblance to non-FF series, though, is perhaps no less important. Bravely Default is a polished, modern take on what is essentially video game comfort food; while it’s different enough to be novel, it’s also familiar enough to be unintimidating. Despite a couple of overlong boss battles so far, I’m looking forward to seeing where this particular journey to save the crystals takes me. 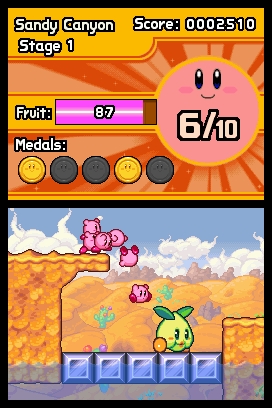 For a long time, one reliable source of video game comfort food for me was the Kirby series. However, when I first started Kirby Mass Attack on the DS more than three years ago, something about the flavor of it didn’t do much for me. I reasoned that this was because I had started it not long after beating Kirby Squeak Squad, and needed a break from the series in general for awhile. After picking up Mass Attack again sometime during my recent playthrough of Soul Hackers, it became clear that it was not me, it was the game. I really wanted to like it more than I did, and although the premise with the multiple Kirbies is interesting by itself, Mass Attack falls short. I’m not really sure why this is; the levels are fairly well-designed, as are the aesthetic elements and the minigames. Maybe it’s because there isn’t as much variety in the strategic elements as in a typical Kirby platformer. Enemies can’t be chomped and then shot out, or digested, their abilities absorbed. The mini Kirbies simply multiply in number, beat on enemies, push or pull things, and do a few other actions, depending on the environment. There’s also mostly dull quicktime events and one particular annoyance that reared its head late in the game, where you’re told that backtracking for certain missed collectables would be necessary to progress; this collectable would be the type of item that’d be purely optional in just about any other Kirby. Anyway, this game was all right, and certainly has its high notes, but in general, it didn’t click with me in the same way that previous Kirbies had. I still love Kirby as a character, but maybe not so much the games anymore, and I feel like another long break is in order.

Speaking of gaming tastes changing, roguelikes is one genre which I will have to become much pickier about in the future. I started two of them, the action roguelike Legend of Dungeon and the more traditional Sword of the Stars: The Pit, back in 2014, played them on and off throughout 2015, and started 2016 with neither of them beaten. They are both more difficult than, say, Dungeons of Dredmor, especially The Pit—while I had made incremental progress in Legend of Dungeon (for various reasons), I had no such luck with the other game.

Anyway, as it happened, I had a couple of days where I’d barely gotten any sleep the night before, and was thus not in the mood to play anything too story-heavy (or do much of anything productive). One day, I spent much of my time messing around with Tropico 5 in sandbox mode, but later, I found myself trying The Pit again, for the first time in months. It was still very hard, and almost unfair; like clockwork, difficult enemies would be crammed into the first room on the next floor while my available weapon choices were still piss-poor. By this time, I had 75 hours logged on the game, and had not made it anywhere past twenty floors (out of thirty) on Normal. I started contemplating trying the game on Easy and started poking around a few places, mostly the reviews and forums on Steam, to see what others thought about The Pit‘s difficulty, especially in comparison to other roguelikes. I was relieved to find that I was not alone in thinking the game too hard, and, later on, fired up a new Engineer playthrough on Easy. I ended up beating the game on this first run, which was spread out over a few sessions within two days. It soon went in the “Beaten” folder in my Steam library, and I moved on to other things, like wrapping up Kirby Mass Attack.

One game which I recently played was quite different from anything else I’d encountered before: the FMV narrative puzzle of Her Story. Its interface comes in the form of a Windows 95-era desktop computer (complete with CRT reflections, if one so desires), which contains, as its main program, a searchable database of brief video clips, all of which are pieces from a series of interrogations of a woman whose husband has been murdered. The main interactions take the form of typing in search terms, watching up to the first five clips that pop up in the results, and tagging and/or saving clips for future reference. Around the time that you, as the protagonist searching through this ancient database, feel compelled to search for a certain term, you begin to suspect that all is not what it seems. The story that follows is strange and engrossing, and, although I have the basic idea down of what happened to the victim, there’s still a few unanswered questions by the end. Aside from a certain (seemingly intentional but kind of cheesy and understandably never pointed out) alternate approach to going through the clips, I really loved this one. The pacing of both the clips themselves and the discoverability of various chunks of the story is so good that I wonder how it was pulled off.

In summary, this is where I’m at by the end of January, with six titles beaten and Bravely Default and Neko Atsume as the only games I’m currently playing. As usual, I’m already wondering about what I’m going to pick up next; a Nippon Ichi strategy RPG (speaking of comfort food…) seems very likely, but I’m not entirely sure about anything else just yet. Hopefully, I can keep up with these progress reports, and maybe write up a few reviews this year as well. Until next time, then…

Some quick site business: Comments are now disabled for all posts from now on. I very rarely got comments here anyway, and most of those that did pop up in the past were either spam, too dumb and/or trivial to approve, or had an uneasily ego-stroking quality about them. For those who left the few decent comments I got, thanks, and see you on Twitter.