There’s a few styles and genres I tend to shy away from. Heavy metal music certainly fits that category, and so do open-world games. Given those facts, I’m not exactly sure why I picked up Brütal Legend on Steam, besides the circumstance of one of their big sales going on at the time and it being, therefore, quite cheap. Perhaps it was the fun-looking setting and aesthetic, or the famously mis-marketed RTS elements, which sounded kind of interesting to me. Whatever it was, I finally got around to actually playing it this month and found it to be a worthwhile game indeed.

The most impressive thing about Brütal Legend is how seriously and thoroughly it treats its theme. For instance, upon starting the game, the player is treated to a live-action intro movie, where actor/musician Jack Black takes them to a record store and shows them a rare album tucked away in the “Forbidden Metal” section. This LP is titled Brütal Legend and has a “Press Start” sticker on the front; doing so opens up the album’s gatefold cover, with “New Game” to the left and “Continue” on the right. This awesome opening menu continues on with the back cover, inner sleeve, and both sides of the record itself. 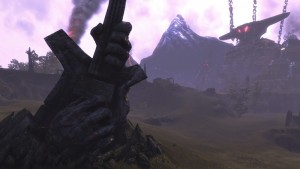 As for the actual game, the world is one where, to put it succinctly, metal rules. The landscapes seem ripped straight from album covers, the “Fire Tributes” earned by doing various tasks take the forms of silhouetted hands holding up lighters, and most every human sports varying degrees of spikes, leather, black clothing, and/or big hair. The men are shirtless, the women are busty, and the beasts have chrome-plated fangs. It’s the kind of universe which is only possible with a heavy metal theme—other musical genres, such as country and hip-hop, have similarly strong iconography associated with them, but are too grounded in reality to make a truly fantastical world out of.

The main character, the Jack Black-voiced Eddie Riggs, winds up in this place by circumstance. While doing his job as a roadie for a shitty nu-metal band, tragedy strikes, and the next thing he knows, he’s somewhere much darker. Soon, he’s got an axe (as in, an axe), an axe (as in, a guitar), a little coupe called The Deuce, and a sidekick named Ophelia. He winds up in Bladehenge, where the siblings Lars and Lita are planning a rebellion against their oppressive rulers. Although the writing is often witty and the optional backstory bits are inspired, the main plot is one of the weakest parts of the game. It’s corny at times, in a Hollywood blockbuster sort of way, and certainly not as original or interesting as its setting. (There were also some spoilers in the Steam Trading Cards which, even with certain predictable story elements, was kind of annoying.) Considering the expense—and, therefore, risk—that went into the production of this game, this lack of originality in the plot does not come as much of a surprise, but is still disappointing considering the rest of the game’s uniqueness. 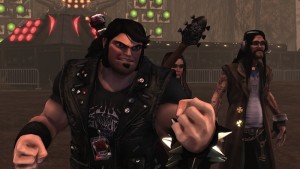 Aside from Jack Black, the cast includes a few famous metal musicians; although some are worse voice actors than others, one particularly good performance is Ozzy Osborne as the Guardian of Metal, a robed gent who trades Fire Tributes for upgrades. Ozzy’s character model, like those of at least a couple others, resembles the real thing, and all of them have a rounded, cartoony quality about them which has aged considerably well. Much the same could be said about the various fighting units (which range from headbangers with amazingly huge necks to hot rod war machines), wild animals, and environmental elements. Eschewing the hyper-realism that has long been the fashion in big-budget games has paid off in dividends; for a title which was originally released on consoles in 2009, it still looks really good.

As for how Brütal Legend plays, as I said earlier, this is both an open-world game and an RTS. As the former, it involves a good deal of driving and general action, with escort missions and car racing sidequests, and plenty of opportunities for putting both axes to work. There’s also, naturally, a few types of hidden things scattered throughout the world and the associated rewards for finding and interacting with them in the right way.

The second genre this game fits under, real-time strategy, is what sets it apart. More complex than Pikmin but (thankfully) not as much as something like StarCraft, Brütal Legend‘s system involves a handful of different unit types along with resource collecting (in the form of “fans” siphoned though the use of “merch booths”), base upgrades, and a simple set of commands. This is all on top of having the option to control Eddie “normally”, i.e. as you would when exploring the world, and once you factor in the usefulness of the special guitar solo moves during these battles, things can quickly get hectic. Compared to the rest of the game, these battles can be overwhelming for someone who isn’t used to dense management-style tactics; outside of the heavy metal theme, this is the best case for Brütal Legend being a niche title. For those of us who like—or at the very least don’t mind—this sort of gameplay, these battles are interesting, though sometimes fiddly, challenges.

A different sort of challenge lies in keeping track of Eddie’s health. Though there is a user interface for things like battle commands and guitar solos, there is no health bar for our hero. Instead, whenever he is near death, the sound of a beating heart is heard and the screen tints slightly redder. While I appreciate this less-is-more approach, there were a few times when I wish I’d had further information about the state Eddie is in.

Finally, I absolutely must mention the music. In addition to a handful of atmospheric instrumental tunes (and the nu-metal band’s song from the opening), Brütal Legend is jam-packed with metal tunes from a wide variety of subgenres. Among others, there’s legends like Black Sabbath, 80s hair bands such as Mötley Crüe, and more modern groups, including Mastodon and (of course) Tenacious D. New songs can be unlocked throughout the course of the game and played via the Deuce’s “radio”, the Mouth of Metal. Switching between songs can be done on the fly with the d-pad, a nostalgically chunky click of a tape deck separating each track.

Like heavy metal music itself, Brütal Legend is not for everyone, but it proved to be very much for me. I have a soft spot for games that are polished yet sufficiently quirky: the types of “b-game” projects that have, more and more, become the province of indie studios as the bigger ones either go out of business or focus more heavily on titles that warrant three A’s, minimum. Sure, offbeat games like Brütal Legend sometimes have questionable design decisions, but the best ones also have a way of shining through with good ideas and execution, and tons of character. That this game had as big of a budget as it did helps give it an especially rare sheen. Sometimes, I wish more people loved these sorts of games, so that more of them could be made.