Quick note: this is my entry for this year’s Review a Great Game Day, a writing jam organized by retro gaming site 1 More Castle. Enjoy!

Out of all the games Shigeru Miyamoto has created, Pikmin is far and away my favorite. I’ve put countless hours into Shiggy’s creations over the decades, from Donkey Kong to Wii Fit, but none has captivated me quite so much as his intimate tale of a diminutive spaceman and the even tinier creatures who aid him during a crisis. It is visually and aurally charming, not to mention a brilliantly designed example of how to do real-time strategy on a console, but it’s also much, much more. 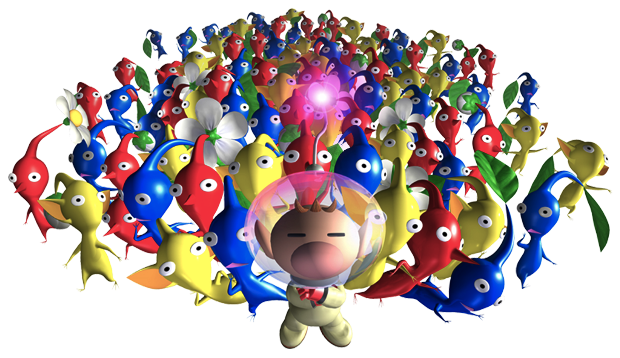 Pikmin is something which is, even now, extremely rare amongst big-budget titles: a narrative game about a normal grown adult. The main character, Captain Olimar, is on an alien planet not because he’s been sent there to fight a war, nor is he chasing adventure or purpose. He’s there by accident. He’s a run-of-the-mill businessman, in the middle of traveling, who crash-lands in unfamiliar territory and spends the rest of the game calmly trying to repair his ride and get home to his worried wife and kid. There are no princesses or kingdoms to save; the only thing which needs rescuing is himself. Despite the fantastical universe he resides in, he’s as familiar as most any commuter you may see on the train in the morning. In this way, Pikmin is about the trials and mundanities of adulthood as much as many other games are examinations of adolescence. It’s shockingly refreshing, and Olimar has since become one of those rare game characters with whom I can truly identify.

Actually, I have to take something back—part of that “fantastical universe” of Olimar’s is almost as ordinary as he himself is, but in a different way. While the planet Olimar lands on is new and interesting to him, its identity soon becomes apparent to the player. As evidenced by the litter that Olimar encounters during his crisis, this strange new world is our own. Sure, the flowers are giant numbered pellets surrounded by petals, the creatures include two-legged speckled bugs and bird-beaked burrowing snakes, and the Pikmin themselves are plant/animal hybrids that could exist nowhere else but a Nintendo game, but there’s no mistaking it. Olimar is on Earth, and he is the size of an insect upon it.

The presence of the Pikmin and other weird living things, combined with the familiarity of Olimar’s situation and the random man-made flotsam, is perhaps meant to make us think about the nature we too often take for granted and our relationship to it. Study real-life plants and animals closely, and you’ll notice a wondrous, vibrant world, perhaps one similar to that which Olimar sees. Even at the current rate of extinction, new species are still being discovered; with that in mind, the birds and bugs of Pikmin don’t seem all that farfetched. The primary-colored Pikmin are clearly inspired by ants, insects which famously work together in groups and come in a wide variety of types. Scenes of them flocking around any given object are entertaining in the same way as watching ants carry a piece of food that’s much larger than they are. 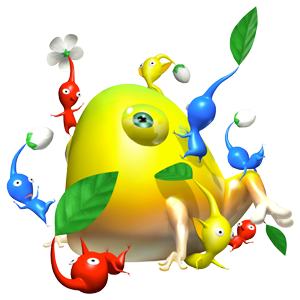 This mix of the unusual and the ordinary naturally extends to the gameplay. As I said earlier, Pikmin is a real-time strategy game. The RTS genre is traditionally relegated to the PC, due to the need for precise controls, such as with a mouse, to organize and command units. Pikmin takes the RTS concept and simplifies things, with just three types of units (red, yellow, and blue Pikmin) and a total limit of one hundred individuals that can be controlled in the field at any time. The defense stats of these units is indicated, Super Mario Bros.-style, by physical appearance, and the best of these can be most easily cultivated by letting them “grow” in the ground for a longer period of time. In any other situation, this would not be a problem, but Olimar has only thirty days to find the same number of parts for his spaceship before his life-support system dies. Thus, time is Olimar’s largest, most ominous opponent, moreso than the massive creatures that attempt to eat the Pikmin along the way. Success in this game is determined by your command of the Pikmin, and how well they can fight off threats and navigate territory both while searching for and carrying back Olimar’s precious parts. Pikmin can be challenging at times, filled with all manner of clever obstacles and terrain, but it is also quite manageable, with a perfectly-tuned learning curve. It helps that the Wii’s “New Play Control!” port is a dream to play with its remote and nunchuck setup (unfortunately, there is no GameCube controller support in this release, so I could not compare the original control scheme to the new one).

The understated soundtrack is standard-quality Nintendo fare, but as for the graphics, they are Pikmin‘s most prominent weakness, as, despite their novel designs, they haven’t aged as gracefully as the rest of the game. Pikmin was originally released in 2001 and it shows, thanks to now-dated texturing and lighting, and simplistic character models. However, please don’t let this put you off on playing this masterpiece. It is one of the greatest and most unique video games of its kind, and also one of the best Nintendo has ever made. It is a surprisingly deceptive game, in a good way: approachable and wholesome enough for kids, but with a story and protagonist which are more relatable to adults. It speaks to its audience about nature and its relationship with humanity, without passing judgment on anyone or anything, leaving the player to reach their own conclusions about the world and its inhabitants. Most importantly, it is mature, in the truest sense of the word, than most other games which claim that adjective for themselves.