I’d been neglecting this place, and I’m still not completely sure why.

Perhaps it was disinterest, or some medical problems I was having (I won’t get into that), or that I was fine just talking about what I was playing on Twitter or various forums. I also suspect that my approach to this blog was part of the problem, and that’s why I’ve decided to refresh the site’s look, rewrite most of the “About” page, and start posting here regularly again.

So, welcome back. It’s been too long, hasn’t it—well over a year! I’ll do my best not to let this project fall by the wayside again, and part of how I intend to accomplish that is by writing about more than just games. In other words, now that I’m no longer active on LiveJournal, this is my main blog. It’s been awhile since I’ve had one of those, too. Figure reviews and most other collecting-related posts will remain on Tsuki-board, but everything else? Here. 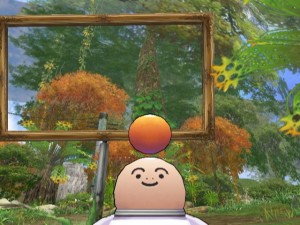 The new theme I’ve come up with, or rather, frankenstein’d together from other WordPress templates, is something I call Tizia, after the homeworld of Opoona, the main character of the Wii game of the same name. I played Opoona this summer; it had problems (most notably a very-bad-by-modern-standards localization), but was unique and charming. It is also probably the only game I’ve ever played where art appreciation is a core part of the world. Hell, art in general is; one of Landroll’s towns is entirely devoted to the arts, and art-related careers are among the many jobs Opoona can pursue while on this planet.

Opoona has lingered in my mind ever since I beat it, in a good way; this is particularly true of the soundtrack, which is composed by Hitoshi Sakimoto and others at Basiscape, and which I have recently finally ordered a copy of. It’s not the best game I’ve beaten this year (that would probably be 10000000), but it’s certainly among the most memorable. I’m not going to ramble on at length about it, since it’s been months since I’ve beaten it, and as such, it’s no longer all that fresh in my mind. However, it’s a curiosity worth checking out if you like charming games as much as I do.

When a game leaves that strong an impression on me, I usually do a piece of fanart. In this instance, it’s a crossover with another memorable game, Ghost Trick, which was one of my favorites from last year’s stack of playthroughs. I’ve also (and this is a first for me) posted some of my process in creating this piece at my new Redirectorium at Tumblr. Yeah, I finally broke down and created a Tumblr like everyone else. I predict that a few years from now, everyone will have moved on to the New Internet Hotness and I, once again, will drag my feet in getting there, but for the time being, yep, I’m on Tumblr.