A Dissatisfying Time in Paradise

When Rune Factory: Tides of Destiny begins, it lets you know right away that this is an atypical entry in the series. After a brief battle sequence—the purpose of which is awfully vague—the two main characters appear in a completely different scene, where they’re spirited away and one is forced to share the other’s body.

From that point on, it continues as any Rune Factory does, on the first day of Spring with a strange new town and a lot of friendly locals to meet, but the differences start becoming noticeable again. For one thing, the house you’re given does not include an adjacent plot of farmland. In fact, it’s impossible to do any farming at all until certain story-related missions are completed. These seasonal farms, like the game’s dungeons, are islands spread throughout a vast ocean, which is traversed across with the help of a massive golem. This monster is both the game’s most important feature as well as the source of many of its flaws. 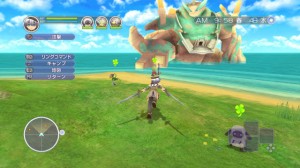 Exploring the world is done by walking all over the ocean via the golem. The golem is a neat feature, but as a form of transportation, it is far from perfect. As opposed to your typical Rune Factory dungeon, which is located close to home, Tides of Destiny‘s monster-infested islands can take half an in-game day or longer to reach. An instant-transport option is available for a good chunk of the game, but is later taken away thanks to story events. This setup can make it difficult to collect monster drops for crafting, but fortunately, reaching the farming islands is as easy as stepping into special portals within the golem.

The biggest single flaw, however, doesn’t have much to do with the golem and in fact messes with one of the core Harvest Moon fundamentals upon which Rune Factory has been based: the four seasons. This is the first Rune Factory I’ve played in which seasons are mostly irrelevant, mere points on a calendar. Seasonal areas are not dungeons this time around, and after restoration, can be used to grow just about any crop. Said crops are grown not through the use of seeds, but with Spirit Magic and captured monsters, each with their own specialty. All of this is fine, but aside from the winter-themed island, upon which only metals, gems, and crystals can be grown, any plant can be raised and harvested on any farm. For instance, with a well-groomed monster, it’s easy to quickly grow cucumbers on the Spring, Summer, and Autumn islands, discarding any need for the careful planning that typically goes into farming. On top of that, most monsters specialize in multiple types of crops, and the player has no option to tell them what exactly they should grow. Because of this, I wound up growing way more eggplants and far fewer tomatoes and that I would have normally. 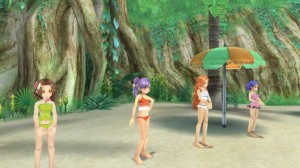 The broken season system extends to the fishing as well. On the main island, the types of fish available to catch don’t vary much between seasons, and for rarities, one must venture out onto the golem to find special spots in the middle of the ocean—which are not added to the map once they’ve been discovered, unlike dungeons and seasonal islands.

Aside from the botched handling of ocean-crossing and seasons, there are flaws when it comes to the optional quests. For the most part, these quests, typically of the “fetch” variety, are all right, but there are a handful that appear early on and require high skill levels and/or rare items in order to complete, including one set which is informal in nature and impossible to get the details of again once it’s been triggered. There is also at least one quest which is impossible to even begin, an apparent victim of the worst bug I have yet seen in this series. As these sidequests are the only way to obtain new recipes for cooking, forging, and so on (though not all of them give out said recipes as rewards), this is somewhat frustrating. Also, speaking of technical problems, when multiple enemies or characters populate the screen, this game suffers from slowdown that’s worse than in some of the DS entries (note that I played the Wii version; I’m not sure if this is the case on the PS3 one). The localization is sub-par as well, with a not insignificant number of grammatical errors.

However, all is not lost with this Rune Factory, as it sports some above average dungeon design and carries over the great timing-based cooking/forging/crafting/alchemy system from Frontier, with a new addition in the form of woodworking. Loading times are also shorter than Frontier‘s, and the still character portraits that pop up during conversations have been replaced with animated 3D models. There’s also a neat musical easter egg that’s triggered by a certain Frontier character who appears for a cameo. 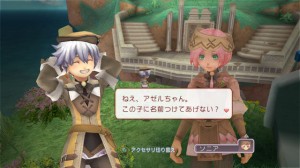 The story is a particular strong point, mixing certain themes from the older games (it must be noted here that all of the Rune Factory tales occur within the same world) with some interesting new ideas. The characters occupy the usual range of tropes, and are everything from charming to irritating, but as in Rune Factory 3, there are consistent mini-stories for each one that flesh them out over time. Two of the most interesting characters are the playable leads, Aden and Sonja, both of whom have more personality, for better or worse, than the rest of the series’ heroes. Aesthetically, and despite some odd decisions when it comes to what lines are given voice, the visuals and sound maintain the high level of quality I’ve come to expect from the series.

Tides of Destiny is one of the most ambitious, but also one of the most fault-ridden, Rune Factory games. It is highly experimental in its revamped approached to farming and exploring and unfortunately, the vast majority of these experiments are failures, but when the game does things right, it really shines. Still, this game is only for hardcore Rune Factory fans like myself. Everyone else would be better off checking out the slightly older, but far superior, Rune Factory 3.