Where I’ve Been, and the Return of Braincrumbs

Yes, I’m back. My main excuse for dropping the ball on this blog for so long was my cross-country move back in early April. It was quite a production, as you can probably imagine, and even now we’re still unpacking, buying new furniture, and generally settling in. Even with a bunch left to do, I feel as though life has only recently started to get back to normal. I’ve even had time to play some games.

In the meantime, I’ve been thinking about what I’m going to do with this blog. My personal blog at LJ is pretty much dead, and I thought about moving it somewhere else, but at the same time, I’m not 100% happy with Brainscraps either. Right now, the plan is to experiment with some non-gaming posts here, making it a more general blog, just with a heavy emphasis on gaming. Thoughts and/or opinions, if anyone has ’em, are appreciated.

Now, as I said before, I’ve been playing games again recently. After pretty much stopping all my gaming in early March in order to pack and do other moving-related things (with a few, scattered sessions here and there), I picked up where I left off in Rune Factory 3 in late April. Since then, I’ve beaten it, and soon followed it up with Might & Magic: Clash of Heroes and the single-player campaign in Portal 2. I have been wanting to write about all three (well, mainly just Rune Factory 3 and Portal 2), but didn’t have the usual luxury of spacing my posts, so I’m doing the mini-review thing again. Here we go…

Daria's a bit nutty, but in an endearing way.

Rune Factory is one of my favorite game series of all time. A sublime blend of Harvest Moon‘s farm-based management (and dating) sim and a hack-and-slash dungeon crawler, it is heaven for those of us who like both types of gameplay. However, coming from Harvest Moon roots, it has not been without its hiccups along the way, including glitches, translation errors, and odd bits of game design. Thankfully, the series noticeably improves with each new entry, and Rune Factory 3 is certainly no exception, as it is the most enjoyable one yet.

The premise is very similar to what we have seen before: hero with amnesia, girl in a small town who gives him a farm to work on, etc. This time around, though, said hero is half-monster, with the ability to transform into a Wooly (the Rune Factory universe’s version of sheep), and said heroine is actually likable. All of the other bachelorettes in the game are interesting as well, with personalities that become fleshed out over the course of their sidequests. By the time I was ready to propose to the girl of my choice, I had maxed out the “love meter” for nearly all of the girls, mainly because I simply wanted to know more about them. On top of that, I liked the other townsfolk as well. Overall, the character development in Rune Factory 3 is outstanding, and a standard that all future games in the series should build upon.

The game’s mechanics have received some spit and polish as well. The farming system has been overhauled for both greater flexibility and greater challenge. Likewise, crafting is no longer the headache it once was, and rare items are now used in leveling up your existing equipment, and not much more than that. Meanwhile, the story progression is set up such that you don’t have to guess your way to the next event, but the player can still take things at their own pace.

Though we have yet to see how the localized Rune Factory Oceans—sorry, Rune Factory: Tides of Destiny—will turn out, for the time being, if you’re at all interested in the series but can only play just one of them, this is the one to play. Despite the occasional technical (or textual) hiccup, I wholeheartedly recommend this game to my fellow simulation and dungeon crawler fans.

In between battles, things look a bit less puzzley.

And now for an entirely different sort of RPG, but no less unique; one set in the world of a Western series, and with turn-based tactical puzzle elements. Clash of Heroes is, as I understand it, something of a departure from your traditional Might & Magic, a series which I know nothing about. Despite my ignorance, it stood well enough on its own as a single entry, and one which I found rather enjoyable.

The campaign is fairly short for an RPG—roughly twenty hours—but that’s as much as this game needs, as there wouldn’t be any real added benefits to additional grinding, what with the low level caps and hard limits on how many units one can have on the field. Each of the game’s main characters is played in turn, and each of their “chapters” progresses similarly to each other, save for the final one, what with its love of multiple boss battles in a row without opportunities to save between each one. Back at the very beginning, the tutorial stuff is handled well enough, but stumbles when it comes to explaining the unlocking and acquisition of special “Elite” and “Champion” units. As for the story, it’s your standard save-the-world fare with conspiracies and a magical MacGuffin. So, the non-battle campaign stuff is, in a nutshell, average and a little rough around the edges.

The battle system in Clash of Heroes is similarly unpolished, but quite a bit of fun. Using the match-three puzzle genre as a point of inspiration, battles take place by lining up color-coded troops into horizontal (defensive) or vertical (offensive) formations. Only the units at the very end of rows can be picked up and moved around; others can just be deleted. As in your typical puzzle game, chains can be created by pulling off the right moves, with the reward being additional actions for that turn. It’s a system that takes some getting used to (especially when doing the optional “puzzle” boards), and there are obvious balance issues with some of the units, but in general it works.

Said balance issues are supposed to have been fixed in the XBLA version of this game (I played the original one on DS), but I don’t know how much else was tweaked. Certainly, it’s an okay time-killer if you can get it at a decent price, and for me, not a bad way to add some variety to an already RPG-heavy backlog. After beating it, though, I was ready to move on. 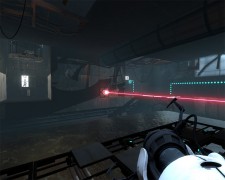 Rounding out this post filled with strange genres is the sequel to gaming’s most beloved first-person environmental puzzler black comedy. This is—so far—the only big new “hardcore” game I have been interested in this year, and thankfully, it lived up to the hype. In this return trip to Aperture Laboratories, test subject Chell once again has to deal with the artificial intelligence GLaDOS and solve her way through chambers and corridors filled with endless amounts of Science. A chatty supporting player, the orb Wheatley, is along for the ride this time, and as in the first game, the environments are characters of their own.

Having gone through the original Portal twice (as well as the tough fan-made Flash Version Mappack after playthrough no. 2), I didn’t have as much trouble thinking my way through the environments in this sequel, even with a handful of new gimmicks thrown into the mix. The one time when I did take a hint to move forward, it was to a problem whose solution wasn’t very obvious; also, it was given to me in a natural manner in-game, reflective of the immersive approach Valve has (once again) employed in this world. There are some things in the environments that either feel gamey or don’t make much sense in the grand scheme of things, messing with the immersion, but they are few. Still, though, I feel that the original Portal did a slightly better job in this area. The wonder—and dread—that I felt playing through Portal were strong enough that I can still recall them; I had no such strong emotional reactions with Portal 2, save for a certain pair of moments, both of which were not driven by the overall environment, but mainly just the audio.

I don’t know if Portal 2‘s bigger, shinier, more mainstream approach is responsible for this less immersive experience, but I do feel that it has contributed to the lowered difficulty curve. There were certain puzzles in Portal that required damn good timing, and there’s quite a bit less of that this time around. Timing is still important in certain instances, but even then the game is more lenient, asking you to rely more on your own cleverness. Going through each individual area has become less about accomplishment and more about seeing what happens next.

Portal 2 is very good indeed (or at least the single-player campaign is. As of this writing, I haven’t done any of the cooperative stuff), but gaming magic is not something that can be easily replicated, especially in a sequel. If you loved the original and wouldn’t mind a longer sequel with more story and fewer mentions of cake, there is much to like in Portal 2. However, it’s a bit like StarCraft 2 in its polished approach, and it’s missing of that intangible something that made its predecessor go beyond the realm of “very good” and into “classic”.

Special Stage: Because of the move, I didn’t make it to PAX East this year. Instead, the plan is to go to PAX Prime, and indeed, we’re all booked for that trip and ready to go. There, we hope to witness the fourth “season” of Canon Fodder. The Season Three roundup is here, and sadly, not as entertaining a read as past summaries, mainly because there’s video attached this time.

(Sorry, little pet peeve of mine.)

And speaking of Square, I found myself greatly amused by The Dark Id’s Let’s Play of Chrono Cross. It really demonstrates just how much of a clusterfuck that game is, and makes it that much funnier and more entertaining. His earlier LP of Dirge of Cerberus is also not to be missed.

Oh, and finally, I’m now on the Twitters.