Me and Samus Aran

Metroid Prime was really good, if a little frustrating at times. The levels, very much including the in-between hallway bits, are incredibly varied, and the puzzles are genuinely interesting. Story bits are told via computer terminals and ruins, which can be scanned with a special visor; as such, there were very few cutscenes, which I liked. A lot of backtracking is required to collect all the doodads you need (and don’t), which got a little tedious at times, and at one point, I had to run to GameFAQs in order to progress (always a Bad Thing to me, though in this case, the solution was merely a little oblique instead of ludicrously buried, *cough*). Both enemies and environments require more elaborate battle tactics as the game wears on, which not only added to the difficulty but the variety. Also, the Wii controls for this first-person game are a dream come true, though I personally would’ve put the default jump control on the Nunchuck instead of the Wii Remote, similar to the Elebits scheme. I’m looking forward to playing the other two games in the Metroid Prime Trilogy set, though probably not right away, as my backlog is nearly all JRPGs again and I need, more than ever, action games to break things up. 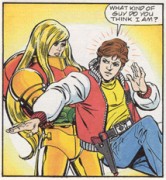 Metroid Prime was also my first Metroid game, believe it or not. However, thanks mainly to Nintendo and fandom, the game’s protagonist was already known to me, though I was not aware of much of the minutiae of her canon. Really, there aren’t too many hardcore gamers who don’t know of the bounty hunter Samus Aran, since, along with Lara Croft, she’s the most famous and iconic video game heroine out there. An important aspect of her is that she has traditionally been a silent protagonist in the games she appears in, much like Mario, Crono, and just about every main-series Dragon Quest and Pokemon hero. In fact, the only time I’ve seen her talk is in the old Nintendo Comics System books, where she is a calm/cool/collected hunter who macks on Captain N.

Recently, Metroid: Other M came out, featuring Team Ninja’s take on the character and her universe. I hadn’t really kept up with this game, but what reviews I’ve seen have been generally favorable. The one from the Onion AV Club got me wondering, though:

It might not sound like a big deal, but Other M focuses on Samus almost to the point of being a character study. In her many internal monologues throughout beautifully rendered cutscenes, the previously strong-and-silent Samus owns up to being petulant in her time with the Galactic Federation, to having misguided, unshakeable loyalties, and to dealing with daddy issues.

That didn’t sound like the Samus I (barely) knew. Turns out it was worse for a more experienced Metroid player at G4. I first heard about Abbie Heppe’s Other M critique via GJAIF, which quoted a Boing Boing article about the piece and its accompanying backlash. In summary, Heppe did not like the characterization of Samus, and took issue with the story itself; she also wasn’t satisfied with the control scheme and overall game design.

From what it sounds like, Samus was handled badly in Other M, and not just in the sense of a silent protagonist becoming chatty: Heppe logically points out as uncharacteristic Samus’ moments of fear when facing a certain enemy that’s a mainstay of the Metroid series. However, I believe this bit is just another fault of the overall approach as well. If I’m reading this right, it seems that Samus is a character whose thoughts and personality we didn’t know at all, but only interpret through what limited information we are given (sparse storylines and cutscenes, her equipment and enemies, etc.), with the rest up to us, the player. The Samus I saw in Metroid Prime was an independent and diligent explorer who seems not to care for the company of others. There’s doubtless many more interpretations of her out there (like her being a greedy and flirtatious sort, a la the Captain N story). An immature and doubtful Samus was not one I ever thought possible, especially not at the point in the canon that Other M takes place in.

Silent protagonists, especially ones that have been that way for as long as Samus has, must be handled carefully when given a voice and thoughts. I can only think of one other instance off the top of my head where a silent protagonist was given a significant personality injection, and the results were also inadequate; the Jak of Jak II was, unlike the original in Jak and Daxter, not someone I particularly liked. Mario might qualify, as he has been given voice in the past through cartoons and comics, but his in-game persona is still largely open to interpretation; at most, his speech is limited to very basic reactions (“uh-huh”, “no”, exclamations of surprise, etc.) and Italian gibberish.

Perhaps Samus should never have been given a personality in the first place, as that, traditionally, has been left up to the players to fill in for over twenty years. That lengthy time, and all the Metroid games filling it, have created many Samus Arans in the minds of uncountable numbers of gamers. Whittling down these many Samuses to one (and an apparently strange one at that) is a very dicey proposition at best. I hope the next Metroid allows us as gamers to once again see our own personal Samuses again.