I finally got around to beating Halo last night. Real-life things, plus the absorbing magic of Dragon Quest V, had kept me away from it for awhile. There were also the Windows issues: that I had to boot into Windows to play it (I’m a Boot Camper), and that my desk is near some very sunny real windows, which in the latter case meant that play sessions were largely restricted to evenings.

Anyway, I enjoyed it. Continuing to be led by sidekick/moral center Jiminy Cortana, I got through a tough spot I had been stuck on, the last of the overly samey bits, and even spotted a Marathon reference in a cutscene. It was all quite entertaining, and I’d like to play more in the series, but there’s the problem of most of it being console-exclusive with no mouse and keyboard support. What would be the point of me playing Halo 2 PC if I can’t play Halo 3 PC? Still pondering my options here. Part of me’s thinking that since I had no problems that one time I played GoldenEye 007 on the N64 back in the day, I should have no real issues using a controller. On the other hand, I really do prefer mouse and keyboard control for first-person games (Wii Remote and Nunchuck are good, too, but that won’t happen for Halo 3, and something tells me Natal wouldn’t be comparable). Anyway, I think I’ll be playing FPSes more often again in general. Metroid Prime Trilogy‘s already in my backlog, and there’s several PC ones that Cyrus and I’ve got sitting around as well. 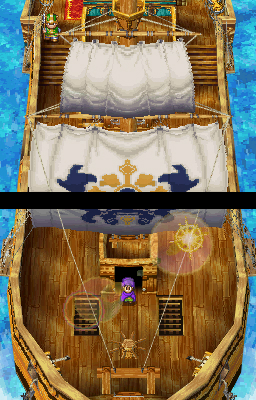 Now, on to Dragon Quest V: Hand of the Heavenly Bride. I can’t say enough good things about this game. It is the best Dragon Quest I’ve played thus far, and is one of the best RPGs I’ve ever played, period. The world, dungeons, fighting, music, and so on is all typical highly-polished DQ goodness, but the story is where DQV really shines. Without giving away too much, the tale is about how a boy becomes a man, and the hardships and joys that he faces along the way. The game’s centerpiece, as hinted at by the subtitle, is the hero’s wedding. The events leading up to it and the eventual choosing of the bride (probably the only part in the game where the player’s actions have any real impact on the plot—keep in mind this is a JRPG!) are a little predictable, but an absolute pleasure to take in. This is a real gem of a game, and as such, it’s a little disappointing that it’s a remake, and thus a reminder that they don’t quite make ’em like this anymore.

In the midst of all this, I got a beta code for StarCraft II! It came from Amazon, not long after word got out that some retailers would be including codes as preorder bonuses. My preorder for the Wings of Liberty Collector’s Edition was already in by that point, so I was good to go; the code was certainly a nice surprise to find in my inbox that morning.

I haven’t played all that much SCII Beta though. Well, I’ve played enough to check out some of the new units, especially the Protoss ones. However, I don’t like playing online much to begin with, so even just my feelings going in were mixed. Might mess around with it some more—but with a stronger focus on Terran and Zerg—before the beta ends, but it’s not a huge priority.

Finally, soundtracks! I’ve been on an OST buying spree, and with the number I’ve bought (and the amount I’ve spent), I think I’ll be set for awhile. Here’s what I’ve picked up:

I also made a set of trades over at VGMdb recently: a couple of spare DDR demo disks for copies of the Grandia 2 bonus disk (which I already had a copy of, but one that was damaged to hell) and a DDR SuperNOVA/Ultramix demo disk (which is wholly new to my collection). It was my first trade conducted through the site and went swimmingly.

That’s all I’ve got for now. Don’t know what I’m going to do today, gaming-wise; I’m exhausted, so I’m kind of iffy about putting more time into Dragon Quest V. I (finally) checked out the Plants vs. Zombies demo last weekend and really enjoyed it, so maybe I’ll get that and do some lawn defense.