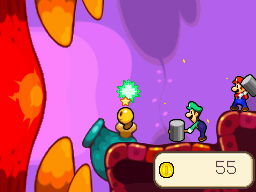 Bowser’s Inside Story is very heavy on mandatory minigames, many of which are required to help Bowser out of tough situations. These games are all well-designed and generally not all that difficult, and involve shooting things, knocking things, knocking into things, et cetera. As a result, the game works well in brief spurts, but retracts further from being an RPG. This doesn’t help the pacing for the initial several hours, nor does the character switching that can be smooth at times and abrupt at others, particularly in regards to certain areas where changes within Bowser’s body affect Mario and Luigi’s environment. Fortunately, once the story really gets rolling and the world begins to open up, that feeling largely fades. 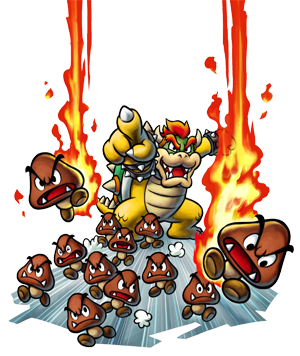 Controlling Mario & Luigi on the field and in battle is pretty much the same as it’s always been. Badges have been completely overhauled for the better, and special Bros. Attacks can be learned by finding “Attack Pieces” in specific areas. Bowser is much less agile than the Mario Bros., but is capable of breaking and burning things on the field, and is much more fun to play in battle. The equivalent of Bros. Attacks for Bowser are special moves where he uses his minions. Unlike Mario & Luigi’s moves, all of these attacks utilize the touchscreen in some way. For example, using Goomba Storm will cause a troop of Goombas to rush at an enemy; if you touch a Goomba, Bowser will set fire to it and the Goomba will launch up into the air for a later, more powerful attack. Bowser also has a unique move that allows him to swallow up certain items and enemies on the battlefield, some of which may show up inside his body for Mario and Luigi to fight. For a few special battles, which are entirely touchscreen-controlled and require that the DS be held sideways, Bowser turns gigantic. These boss encounters initially reminded me of the tank battles from Dragon Quest Heroes: Rocket Slime, but are much less satisfying and don’t require strategy and timing so much as trial and error. They are one of the weakest parts of the game, but thankfully, are also rather infrequent.

Though it has a lot in its favor, I can’t call Bowser’s Inside Story the best of the Mario & Luigi series. However, it is still a Mario RPG, which is to say that it has platforming as well as RPG elements, has tight controls, is accessible to anyone, is zanily humorous in a way that no other franchise could possibly be, and brims with quality. You’ll like this one if you’re already a fan of the series… and if you aren’t put off by minigames. And if you have never played a Mario & Luigi game, what are you waiting for? Any one of them, very much including Bowser’s Inside Story, is a good place to start.