A Nice Place to Visit, but…

Although I play a lot of stuff published by Square Enix, prior to Radiata Stories, I’d never played a tri-Ace game before. Squeenix games developed by studios like Jupiter, Level-5, or others, sure, but for some reason, never tri-Ace. I’m familiar with their reputation for shiny graphics and generally average games, though, and Radiata Stories in particular seems to be a polarizing title. 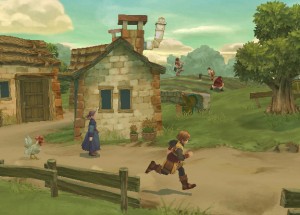 It is a very pretty game, with appealing graphics that border on painterly, and—unlike many other games where brown is the dominant color—are pleasing to the eye. Similarly, the soundtrack is quite good; certain tracks would always get stuck in my head over the course of my playthrough. This being Square Enix, the localization is also solid, with nary an annoying voice to be heard.

The underlying mechanics are also, for the most part, excellent. The battle system is one of the best I have ever seen in an action RPG. This is a much more immediate system than your typical one a la Tales or Kingdom Hearts, where AI-controlled party members’ capabilities are individually tweaked through menus. A menu is still used here, but everything goes through the main character, Jack Russell (named after the dog breed?). Once Jack is able to lead his own parties, he can issue commands to individual members or the whole group, and even call them into special formations. These commands can be learned in various ways over the course of the game, and like with a lot of battle systems, you’ll come to rely on certain actions more than others. Battles themselves are generally easy, and whatever genuine challenge gets thrown at you isn’t of the frustrating kind. As for navigation, for the most part, I was able to get around just fine, with the final dungeon being the most annoying place in a world that lacks them.

Where Radiata Stories falls apart—oddly enough, given the title—is in the storytelling. It starts out promising, with Jack leaving home to go to Radiata Castle, to join an order of knights. This initial part of the game is plot-heavy, but by the time Jack takes up residence in the town surrounding the castle, the player finds that they now have a lot more freedom… or so it seems. Here, the game’s quasi-open world feel expands even more; in addition to the regular day and night cycles, Jack can now take on odd jobs, make friends, and freely explore most of the city and world. However, unlike a lot of open world games, story events in Radiata Stories can’t be started at your own pace; instead, they will be automatically triggered after waking up or—more annoyingly—after arriving at home to save your progress (and naturally, you can’t do so until whatever cutscene that happens is over, if they allow you even that). About the save system: there are a few temporary save points throughout the world which pop up during story events, but permanent ones only exist in one place at a time, which is always in Jack’s living quarters. You can see how this can be problematic.

Aside from pacing concerns, the story itself has its share of cracks. Though most of the characterization is great, Jack himself isn’t handled particularly well. Certain aspects of his personality change too quickly, even given the tale’s brevity; it leads one to believe that Jack is either naïve or fickle, or both. The meat of the plot, once the game gets around to it, is somewhat confusing. There are two branching paths this story can take; the ending I got was unsatisfying, and what I’ve heard about the second one didn’t sound all that hot either.

Despite its great battle system and beautiful visual and aural aesthetics, I can’t really recommend Radiata Stories. Much as I prefer to play games for the actual game parts, a competent narrative (whenever narrative of any kind is called for) does contribute a lot to the overall experience. While the story does try to break away from certain JRPG clichés in an admirable way, it interrupts the open world flow of the overall game when it isn’t wanted, and on top of that, doesn’t make a good enough case for its own importance. Radiata Stories is chock-full of promising ideas and approaches, especially for a JRPG, but in the end, it doesn’t deliver as well as it could have.