When I first played Tales of Symphonia last year, what most struck me about it was how large and complex the story was. In addition to the main plot, which was meaty enough on its own, there were also the smaller, personal stories of each of the playable characters. These were told over the course of the game, and also through optional events called “skits”. By the time the final battle came about, I knew Lloyd and his crew intimately—their personality quirks, their hopes and fears, their likes and dislikes. This particular brand of character building seems to be a hallmark of the Tales series, as I encountered it again in Tales of Legendia.

The main storyline of Legendia is much shorter than Symphonia’s, but this shortening comes at a price. Although a fair amount of personality and depth had been given to the characters, there were still some unanswered questions by the end. These questions—many of which tied into the greater question of, “Why did (character) come to the Legacy?”—are all handled in the Character Quests, an optional companion piece that becomes available once the main game is beaten, and takes just as long (or longer) to finish. 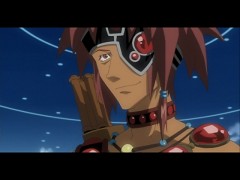 Regarding the Character Quests, the manual says that, “only after the bonds between these characters are understood that the true ending of the story is uncovered,” which is a little misleading. The overarching story that links the Character Quests is largely detached from the main plot, and thus, the whole thing feels more like a sequel, albeit one with no voice acting (battles and skits notwithstanding), and where all experience, equipment, items, and gald (the currency used in the Tales games) are carried over. Though the dialogue rambles on unnecessarily at times and the plot seems oddly Legacy-centric toward the end, the interconnected stories of the Character Quests are all enjoyable and well told.

After a brief introduction, the Character Quests get underway, one at a time, until the biggest mysteries are explained. In between the lengthy, lengthy cutscenes, the party is required to revisit just about every dungeon in the game, and sometimes backtrack through them as well. As you can imagine, this is a bit tedious, though new enemies, refilled treasure chests, trickier puzzle booths, and a new item called the Sorcerer’s Scanner vary things up a little. Regarding that last item on the list: the Sorcerer’s Scanner is a special tool that allows the player to search their immediate area for hidden items or monsters. Though many dungeons contain obvious areas where hidden stuff would be, in others, it’s a case of constant trial and error. Add in the fact that your character comes to a stop whenever the Scanner is used, and dungeon crawling turns into a potentially tedious exercise of its own. Of course, no one has to use the Scanner, but some of the better items can be found this way.

Also new in the Character Quests is a workshop where certain rare items can be forged into powerful weapons, armor, and accessories for the party. Some items in particular can be very hard to find unless you either have a guide or are willing to try out everything, but such is life in your typical JRPG. The last major new feature is a Battle Arena, which is what it says, and which I only participated in a few times.

Overall, I had a good time with Tales of Legendia, both the main story and the Character Quests. It’s a real credit to the game that the story is so good, and the characters so interesting, that I’ll keep on playing even when the otherwise flashy action gets stale and the otherwise pretty dungeons get tedious. If you like story-centric RPGs with a script, visuals, and sound that are all quality, this is one game where you can’t go wrong.