Tales of Symphonia wasn’t entirely my thing: the story’s inspirations were obvious and it got convoluted at times, the cel-shaded graphics were okay but blurry (at least on the Wii, which is how I played it), and the combat was usually button-mashy. However, I liked the characters and general aesthetic, and somehow, it got its hooks into me. Thusly, when I fleshed out my PS2 RPG collection last year, I ended up adding Tales of Legendia and Tales of the Abyss to it (the 360’s Tales of Vesperia joined my backlog this year).

I’ve heard Abyss is better than Legendia, but wanted to play the older game first, since I found the premise more intriguing: a young man and his sister find themselves shipwrecked on a massive ancient ship called the Legacy. Aboard this vessel are dangers awaiting the sister, and the man sets out to save her. At first glance, and despite the presence of the clichéd large relic from an ancient civilization, it seems a novel enough premise, and the story does carry out in a unique way, especially in regards to how a certain story event and its aftermath is paced. Also, Legendia, like Symphonia, bluntly tackles the issue of race in how (and why) the game’s factions are divided as they are. The entire story takes place aboard the Legacy—making it a nice change of pace from the many, many JRPGs that require entire worlds to be traversed—and the cast of characters is charming, though a touch clichéd and/or weird at times. This is all presented in a colorful, softly-rendered world populated by chibi characters, who are occasionally shown in still, non-chibi 2D anime versions for cutscenes. As with Symphonia, the voice acting is of a decent quality (and there’s a lot of repetition when it comes to the battle audio), the music is nothing overly special but all right just the same, and the FMVs are lush anime affairs courtesy of famed studio Production I.G. 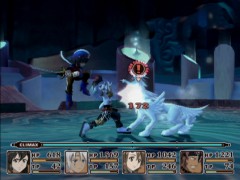 As for exploration and combat… well, it’s what I expect from a Tales game, though a step back from Symphonia. The dungeons are fairly linear, with what few branching paths there are largely reserved for items, including special items blocked off by large blobular zones that often contain more powerful monsters than the usual random encounters. Battle is still button mashy, with assignable special attacks and your supporting party members on autopilot, for the most part. AI party members’ attacks can be turned on and off at the player’s leisure, and whole tactical strategies can be applied as well. However, aside from certain boss fights, the battles are quite easy, and certain special enhancements and attacks, such as the feature that lets the player combine a character’s individual moves into one uber-move, can be outright ignored.

The meat of Tales of Legendia is fairly short: I beat it today with a completion time in the range of 33 hours. However, a lengthy postgame mode, called the Character Quests, is available once the main storyline has been beaten. I’ve barely started it, and in fact am debating whether or not I want to continue with it as Legendia’s combat’s a bit bland, but there’s still things I don’t know about many of the characters—and I’d like to know. Such is the hold that the characters in this game seem to have on me.

Special Stage: In addition to game impressions and such from this year’s Tokyo Game Show, Game|Life’s Chris Kohler has been writing an awful lot about Japanese curry lately. I’m not all that big on curry, but I do love me some katsu, and as such, these posts have me craving chicken katsu or chicken katsudon. Every. Single. Time.

I haven’t even dipped into the TGS episodes of Listen UP yet, but given the “curry bets” of previous shows, all of which were to be settled around this time, I don’t think my cravings will end anytime soon…

(ETA, 9/26: Craving fulfilled thanks to some oyakodon from a favorite restaurant; save for the mushrooms and pickled radish, neither of which I’m a fan of [thankfully the latter was all in one small section of the bowl’s edge, getting its vinegar all over some neighboring carrot sticks], it was essentially the same as the chicken katsudon I’m used to from another place, and tasty. I have some leftovers to eat for lunch today, too!)