The Spirit of Exploration

Storytelling can be a rather contentious subject in modern video games. Not all games have or need stories, but many of those that do seem to be carefully scrutinized by those looking to justify gaming as an art form. Part of this is due to gaming’s inferiority complex, which explains the film and literature comparisons that get thrown around every so often. However, I believe that the best game stories, the ones which gamers should be holding the most dear, take advantage of the medium in ways unique to it.

Seeing as how this is the case, and coupled with the interactive nature of the medium, the types of stories best-suited for games are ones told through the environment and incidental events, with the “you” character left fairly open to interpretation. You play an protagonist who, at the beginning of the game, finds themself in a new and unfamiliar situation. Your final goal, though not obvious at first, can be anything from escaping confinement to saving the world, but when initially presented with your surroundings, the first thing you do is either explore them on your own, or do so while following a guide of some sort. Through these explorations, the world and the characters and things within it begin to tell the second-person “you” the story, and you are drawn in, becoming not only involved in the tale, but central to it. 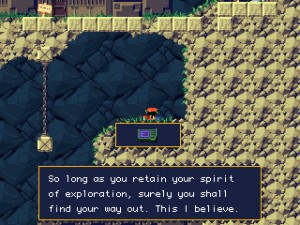 This approach to game storytelling is at the heart of Cave Story, which begins in a small, nondescript chamber. By opening a door and wandering through caverns, you eventually find your way to a small village, which is where the story begins in earnest. Said story is dripped out in little bits—a mention of the Doctor here, some flower petals there—and relies little on deux ex machina devices and third-person cutscenes. What results is a meaty tale with little fat or gristle to unnecessarily add to the weight.

Environmental second-person storytelling is also at the heart of Portal. Here, the voice of an artificial intelligence guides you along through a series of laboratory tests. However, the real story is told through independent exploration conducted during the process of figuring out the tests’ puzzles. This not only gives the player a break from an otherwise rigid, linear experience, but enhances it as well.

One game which has been held up on a pedestal by the Games As Art crowd is Shadow of the Colossus, and on the surface, it appears to hold to the same narrative structure as Portal. However, there is a distinct reluctance by the game to trust the player. First off, subtext is primarily handled with cutscenes rather than through the player’s own discoveries; the only pieces of the story the player has an active role in is through the killing of the titular Colossi. There’s also the fact that the god-figure will start to offer hints if the player seems to be taking a long time to figure something out (and annoyingly enough, this feature can’t be turned off). The hand-holding at the beginning of the game, in the form of brief control tutorials which come along as necessary, is truly helpful and not too invasive, but the god-figure’s hints take helpfulness to new extremes. These quirks, and the latter one in particular, break the immersion and remind the player that they are not the protagonist but rather a person playing a game, thus lessening the potential strength of the narrative.

Most story-driven games don’t (or can’t) follow the same approaches that Cave Story and Portal do, and instead make use of compromises. These could be anything from a silent protagonist, to branching paths and multiple endings, to an “open world” structure. This is not necessarily a bad thing—some of my favorite games use such compromises to great effect—but to me, an ideal game story is one that can’t be told quite the same way in another medium. A good narrative that relies heavily on cutscenes and handholding is one that might as well be translated into a television show or graphic novel. On the other hand, one that encourages and rewards exploration and experimentation is one that I would be loathe to revisit in a form other than a game.