Game Progress: Reaching for the End

Last night I beat Klonoa (or rather, the Wii remake of Klonoa: Door to Phantomile if you want to be pedantic). As is the case with other games in the series I’ve played, I managed to get a lot of the extra level goals, but not everything, especially since the last three Visions cranked up the difficulty a good deal. I don’t think I’ve ever played a game with such narrow platforms as Klonoa, and the later Visions, and the next-to-last one in particular, had them in spades. Despite being spoiled for a mid-game plot point before I’d even bought the damn thing, I enjoyed it, though I think I prefer Klonoa 2: Lunatea’s Veil, just a little bit more. It was my first Klonoa, which I think might explain my preference. Now I just have to get a cheap copy of Dream Champ Tournament… 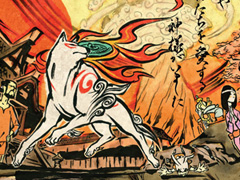 Still plugging away at Okami as well. The story took a very odd turn about twenty hours in, and the pacing and gameplay structure since then makes it feel like I’m playing a different game altogether. I’m not sure if the changes made in this arc are an improvement—the chase bits are a little off-putting, actually—but considering that I’m now one brush short of the full set and have most of the world map explored, I think it’s safe to say I’m pretty close to wrapping this up. My overall opinion of Okami hasn’t changed much since I last wrote about it, and I don’t think it will. It’s very pretty and occasionally charming, but it’s also quite dull in bits and can’t settle on an overall tone.

Pokemon Ruby continues to be awesome. Right now I’m coming off another round of battles against Team Magma, and something very bad has happened. There’s still some stuff I have to take care of before challenging the trainers at the eighth gym, but hopefully my team can handle it. My regulars and alternates include Marshtomp, Mightyena, Absol, Tropius, Zangoose, Tentacruel, Swellow, and others.

Right now, I’m hoping to wrap up Okami sometime next week, and maybe beat Ruby as well. As for what I plan to play next, Secret of Mana definitely, and I’ll probably also delve into Rogue Galaxy, which is the game which has sat in my backlog the longest, IIRC.