Archive for the ‘Spectator Mode’ Category

Games will be Games

I know it’s been a long time since I last posted here, and I’m afraid I don’t have any truly valid excuses for that other than general procrastination (though the issues I’ve been having with WordPress lately are annoying). However, there has been a lot of gaming going on in our household, as usual. I will write about some of the games I’ve been playing later, but for today, here’s a couple that my husband beat over the last couple of months.

First up was Batman: Arkham Asylum, specifically the “Game of the Year” edition for Xbox 360. Having been a PC gamer for several years, the mere existence of a console GOTY edition once struck me as a bit odd, but it’s also a sign of the times. After all, console games have steadily become PC games this generation, with bugs, the requisite patches for those bugs, and expansion packs, now termed “downloadable content”.

Arkham Asylum itself, however, is a console game through and through. Genre-wise, it’s a brawler set in a somewhat open-world environment, complete with combo moves and collectables. It stars everyone’s favorite DC Comics hero, the Goddamn Batman, in a game world that is as dark, gritty, and poker-faced as he is. This world is the microcosmic Arkham Asylum, which is located on an island this time around, and is grimy and run-down, almost in that Weird NJ abandoned mental hospital sort of way. The fist-fodder consists of a handful of standard enemies with a few weapon variations thrown in, plus the odd grotesque supervillain. The plot is comic book/video game boilerplate, and there are several references to the larger Bat-canon littered throughout, including a database of series villains that (although being wildly inaccurate in regards to Harley Quinn’s first appearance) makes for interesting reading.

Gaminess runs as rampant as the inmates. One of the first things one notices about the game is the odd placement of Batman when the player is controlling him; instead of being centered on-screen, our hero is off to the left when walking around, an arrangement that my husband found took some getting used to. Clearly, the goal in this bit of design is to give the player a clear field of vision without resorting to a first-person perspective. It’s not what I’d call immersion-breaking, but it does call attention to itself. Then there’s the gadgets, which are optimized for extreme gaminess. One favorite was the Cryptographic Sequencer, a hacking tool that uses two dials (or analog sticks, if you prefer) to short-circuit electronic locks.

Perhaps the most interesting thing about Arkham Asylum is how violent it is—despite Batman being a character who avoids guns and killings out of principle, and despite this being a T-rated game. When Batman punches or kicks a villain, the hit is hard and brutal, emphasized by the animation and sound effects. This is a Batman for the New 52 era, even before that reboot existed; a Batman as concerned with grittiness and realness as your average gangsta rapper. In a way, this subtle pandering to the demographic that this game is going for (while still maintaining a T-rating), is yet another sign of gaminess, and not a particularly encouraging one at that.

Assassin’s Creed II‘s Ezio Auditore di Firenze is a more suave, stylish, and handsome hero than the Dark Knight, and we welcomed him back into our lives with the next game on my husband’s agenda, Assassin’s Creed: Brotherhood. Compared to its predecessor, it was largely more of the same, albeit in a (mostly) new place, the city of Rome. The story picks up right from the ending of AC2‘s, continuing on with a new main goal, more assassin missions, an altered approach to management simulation, a smattering of interesting new features, and yet another crazy ending.

The entire Assassin’s Creed series is gamey by design. You are playing Desmond who is “playing” his ancestors through abstracted means: the Animus device and its software. When Batman picks up an audio tape that just happens to be shining, there’s no excuse for that shine other than the game’s developers wanted to call attention to it. When Ezio spots a collectible Borgia flag marked by a certain white glow, that artifacting is intended to be a feature (or side-effect?) of the Animus. The same goes for the game’s menu, health meter, “Truth” puzzles, and just about everything else. Even the part of the menu that details historical facts is said to have been written by someone in the real world; in the Ezio arc, it’s the snarky Brit Shaun.

True gaminess outside of the veneer provided by the Animus is smartly rare. When Desmond steps out of the device, there’s no health meter or map, and the menu is irrelevant. One unintentionally hilarious bit of gaminess manages to sneak through, however: Desmond wears a sling-style backpack, which he keeps on when sitting in the clinical, ergonomic Animus.

That said, the meta-narrative involving Desmond presents an interesting problem for future installments in the Assassin’s Creed series. Many have speculated that Desmond himself will be playable for the majority—if not all—of a future title. Yet, how would this be pulled off while providing the player with the information they need (via the HUD and menu system) while explaining these tools existence in the real-life world? There have been hints throughout all of the games about the changes in Desmond’s perception, but tacking on a HUD to his real-life adventures would be a bit too much.

Gamers still don’t know if a Desmond-centric Assassin’s Creed is in the works. Series developer/publisher Ubisoft seems to want to milk the series for all its worth, and after the recently-released Revelations, said to be the last game to star Ezio, they could very well dip back into history with something set during the American Revolution, or the Victorian Era, or World War II. The possibilities really add up with a series like this, and it could be a long time before Desmond sees the last of that ol’ Animus.

Comments Off on Games will be Games 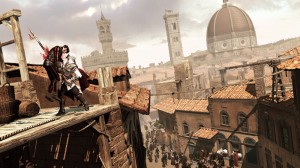