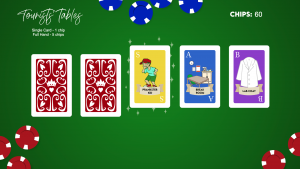 Sometimes ideas come along that you had never planned in the first place, and you just have to execute them. Thus, despite my announcement that there would be no Holiday Card this year, about a couple months ago, I started work on a game. It’s not a Holiday Card, though, so it’s technically okay, right?

This time around, it’s a fangame loosely inspired by my all-time favorite, the original Final Fantasy VII, titled DARK CITY FOURTH STREET, Part One: The Sprawl. This title was inspired by a very peculiar part of FFVII‘s Debug Room, and the plot takes Hironobu Sakaguchi’s original idea for FFVII as a detective story and runs with it. It tells the tale of detective Cloud Strife as he takes on a job related to the environmental terrorist group AVALANCHE, and branches out in a few different directions. There are a number of endings, and even some hidden scenes. Also, as with a certain other revisiting of the FFVII world, this game is the first installment in a series, and ends when Cloud leaves Midgar.

As with my previous game, DARK CITY FOURTH STREET, Part One is exclusive to itch.io, though this may change in the future. Kick back, put on “Anxious Heart”, and enjoy!