okamichatting, and the huge ginormous OST

Last night, the planets had aligned in such a way that a rare and wonderous thing happened: the three of us were on AIM all at the same time. As we had planned to do AIM chats as a part of this project, one was promptly organized. Before the chat derailed into talking about games other than Okami, here’s some of what was discussed.

CloudANDTidus is only about four hours in, due to his PS2 being flaky when reading his memory card, and I’m currently stuck on a boss; namatamiku is the furthest ahead, though it sounds like I’m only a little ways behind him. As for my boss battle woes, I laid a huge chunk of the blame on the camera. Clidus asked, “What was the camera doing?”, and nama replied, “Finding the best possible position to screw with the player,” which is pretty accurate.

This led into a discussion about Issun (Clidus: “Just imagine that the camera is controlled by the little guy that lives on Okami’s nose.”). Nama thought Issun was going to be hateworthy at first, but has since grown to like him. I was in the same boat, anticipating a Navi-like character. That led to my confession that I’d never played a Zelda game, which was met with (expected) shock from the others! Zelda recs followed, then it was back to Okami, where we talked about how the graphics look blurry in HD; for Clidus, it’s bad enough that he can’t play for long stretches, since the blurrieness gives him a headache.

Anyway, things got offtopic not long after that. Later on, after Clidus had turned in for the night, nama and I continued chatting, and Okami’s music was brought up. I mentioned how huge the original soundtrack is, and offered to take pictures for the blog. Nama liked the idea, so here you go. (Click on the thumbnails for larger versions of the pics. Also, I apologize in advance for the slight blurriness in a couple of the photos.) 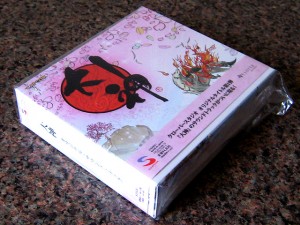 I bought the OST for my husband as part of a largish CDJapan order, a full five disks worth of music from the game. Of course, these five disks make the case a bit thicker than average. Here’s how the spine looks compared to the ones for a single-disk OST and a four-disk one: 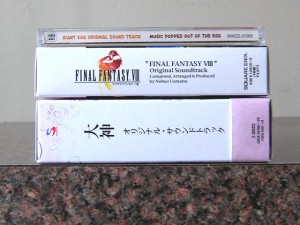 Here’s the front and back cover art: 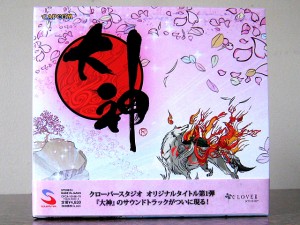 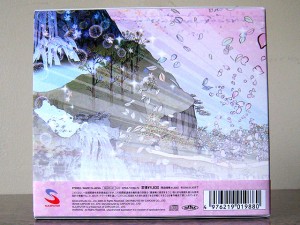 Let’s open this sucker up: 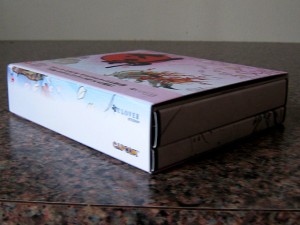 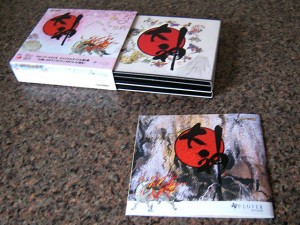 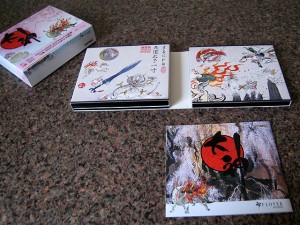 And now, the full unfurling: 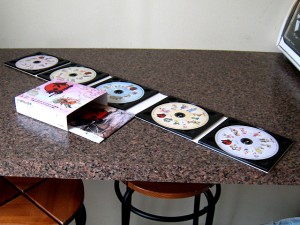 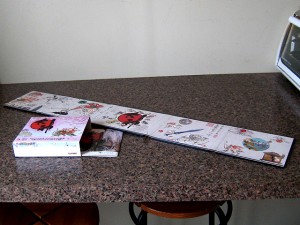 Detailed pics of the disks and booklet may come later, especially once we all get further into the game. A lot of the OST’s art seems to be spoilery, and I’d like to avoid as much of that stuff as I can right now.