Archive for the ‘Current Events’ Category 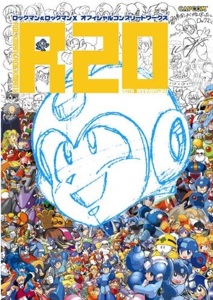 Capcom puts out some lovely video game artbooks; a couple that I have in my own collection are The Art of Gyakuten Saiban and Devil May Cry Graphic File. Sometimes some of these artbooks come out in English, published by UDON Entertainment.

Last year, word got out that UDON would be bringing over R20, a 20th anniversary artbook covering the Mega Man (aka Rockman) and Mega Man X franchises. I’m not a Mega Man fan, but am always glad to see more translated video game artbooks. So anyway, upon scanning the latest release list at Midtown Comics’ site, I noticed that two UDON books are being shipped for this coming Wednesday: Mega Man Official Complete Works and Mega Man X Official Complete Works. Going by the books’ page counts, for whatever reason, UDON split up R20 into two separate volumes. Okay, I guess that makes sense, sort of. However, what really shocked me was the price: each book is $39.99.

Keep in mind that R20 normally costs ¥3,200 (US$35.36 as of this writing) and the prices on UDON’s other books tend to be reasonable. Yeeeah. Mega Man fans, I think someone’s trying to gouge you. Import the original or get UDON’s editions cheap/on sale, but please don’t pay full price for the latter or they might pull something like this again.

Comments Off on Mega Markup

My E3 Prediction: People Will Complain

I don’t know with absolute certainty if any of the predictions being made for this year’s E3 will come true, but there is one thing I am absolutely sure of: no matter what gets announced, people will complain about it.

My reaction: Pretty cool!
Everyone else's: This is gonna suck hard.

Yesterday, Square Enix put out a press release containing their E3 2009 lineup, which included the new announcements of NIER and Front Mission Evolved. This latter title is the latest entry in a series which I am a huge fan of. However, unlike the majority of Front Missions, Evolved is not a strategy RPG, and on top of that, is being developed by a western studio. Seeing as how few Front Mission games make it out of Japan in the first place, and Evolved is evidently being developed for a global audience, I’m very much interested in and curious about this new entry, however different it is; as long as that familiar Front Mission world is present and the game itself is enjoyable, I’ll be happy. Others were not so enthused.

Truth is, even before this announcement, I had been planning this post, because I know if there’s one thing hardcore gamers like to do, it’s complain, and E3 is the Griping Epicenter of the Gaming Universe. Nintendo fans in particular will be the ones to watch this year, as by all accounts, Ninty’s E3 2008 press conference was generally underwhelming. Although there are many, many sane Nintendo fans, the gripers are notorious for their constant insistence that a new Mario and/or Zelda should be shown whenever possible. Given the small hints dropped in the past about new Wii installments for both of these franchises, many people see the official announcements of these games as being inevitable for this E3. If they don’t happen, people will complain, and loudly, but even if they do, somebody somewhere will find something to whine about. The new Mario will seem too much like a retread, or it’ll be too different, like the much reviled Super Mario Sunshine. Same goes for the new Zelda. Other Nintendo games that are rumored to be unveiled at E3—especially Wii Fit Plus and Pikmin 3—aren’t safe from fanboy complaints either. Smaller Nintendo franchises like Another Code/Trace Memory, Kirby, and the like whose new Wii and/or DS installments were confirmed long ago will probably be ignored by everyone save for their own fanbases (who, more often than not, are just happy that Nintendo remembers they exist) in favor of the big guns. I won’t even touch the Kid Icarus fans…

This situation isn’t unique to Nintendo, as we’ll see variations on it on the Sony and Microsoft sides, but in the case of those two companies, I think there will be proportionally more griping over hardware and services rather than software. The PSP Go and 360 motion camera dongle, among others, are strong contenders for unveiling at the Sony and Microsoft press conferences, and as such, are also big targets for fanboy whining. Certain highly-anticipated Sony games, namely Heavy Rain and “Project Trico”, will undoubtedly be generally well-received if they are shown in some form at E3, but as for Uncharted 2, God of War III, and others, well, somebody will probably complain about something. If Halo 3: ODST is shown at Microsoft’s press conference, cue the hardcores complaining not so much about the game as Halo fanboys.

The Big Three aren’t the only ones who will be targets of fanboy grumblings. Companies ranging from EA to Ubisoft, Capcom to, yes, Square Enix, will be complained about wide and far. Whining about many of the games that have previously been announced and will be seen at E3 has been going on for some time already, anyway, but new game announcements will see their share of complaints as well, as we’ve already seen with Front Mission Evolved. Even small niche companies aren’t completely safe from fanboy griping, though they’re considerably safer than the bigger publishers.

A good E3 is always full of surprises and memorable moments (giant enemy crabs, anyone?), and I hope this year’s will be no different. However, I could do with less pissing and moaning from the peanut gallery. Chances are, when the games people gripe about now are finally released, if they have enough hype and/or good press behind them, they will be bought and played by many anyway. Some of those early complaints may even be moot. Either way, come next week, I guarantee you that somebody somewhere is going to be complaining about the video games shown at E3.

Comments Off on My E3 Prediction: People Will Complain

…and the internet goes crazy with speculation as to what will appear at the LA Convention Center, and most importantly, the console manufacturers’ press conferences.

The logo that drives the fanboys wild.

Last year, Joystiq took this annual guessing game and made something fun out of it: Bingo cards. There were cards for each of the Big Three, as well as ones for PC and MMO predictions. Unfortunately, none of them resulted in a “bingo”.

Joystiq is playing bingo again this year, with predictions ranging from the likely to the wacky. I’ll be playing along again, though this time around, I’ve marked the ones I think will be mentioned at each of the companies’ press conferences ahead of time. The cards have been desaturated for clarity; the red pucks mark my “very likely” choices and the orange ones are the “well, maybe this’ll happen” pics.

My Microsoft picks. First off, let’s get the easy stuff out of the way: the second GTA IV DLC pack had been announced not long after Joystiq’s bingo card went up. It’ll probably be mentioned in the press conference, so that’s a shoo-in. A Halo 3: ODST release date and a Mass Effect 2 demo both seem well within the realm of possibility; as for Alan Wake, I think we might hear something about it, but not necessarily release info. New bundles and the oft-speculated motion capture thingie are both damn near sure things, and clan support for the 360 is a bit of “wouldn’t it be awesome?” that I’d very much like to subscribe to and believe MS would go for.

My Sony picks. The three most likely picks for me here are an official “Project Trico” (the next Team Ico game) reveal, more on God of War III, and the highly rumored PSP GO. PS3 Greatest Hits and bundles in place of any price cut also sound like strong possibilities. I think Heavy Rain will be present, though there won’t be a “heavy focus” on it. PS3 doing a Blockbuster rental service smacks of too bold of the kind of “me too” move for which they’ve been criticized for in the past, and runs counter to their Blu-ray strategy. As for a release date for Gran Turismo 5… well, if Final Fantasy XIII could wrap up, so could GT5, I guess. I predict that we’ll see some new GT5 footage at the press conference, but a release date will remain way up in the air.

My Nintendo picks. Nintendo is the company I follow most closely, as the Wii and DS are my de facto consoles of choice this gen. Their press conference last year was underwhelming, but I think they learned from it, which is why I believe that although we’ll be seeing Reggie and Cammy antics, there’ll be less of the latter. As with PS3 Greatest Hits, we’re about due for a Player’s Choice line for Wii, though one must also consider that there isn’t such a line for the DS yet. Game Boy VC games and VC for DSi are both things the fanbase has been clamoring for for months, and although Nintendo doesn’t have the best track record with their obscenely demanding fans, these two things seem very likely to me. The transferable VC games less so, if only due to controller compatibility issues. A new Mario has been briefly mentioned by Shigeru Miyamoto before, but I’m largely playing semantics here, as a North American release date for Mario & Luigi RPG 3 is due any day now (I, for one, am very much looking forward to said announcement, as I enjoy the Mario RPGs much more than the main series these days). A new Wii Zelda seems less likely considering the Spirit Tracks announcement at GDC.

Here’s some announcements—both likely ones and longshots—I would personally love to hear at this year’s E3, besides a Mario & Luigi RPG 3 North American release date: Sly Cooper 4 (even though I don’t have a PS3!), Sigma Harmonics localization, Valkyria Chronicles 360 port, StarCraft II release date (more likely to happen at BlizzCon or some other Blizzard event), Game Center CX licensed for DVD release (more likely to happen at one of the summer anime cons), Game Boy and Game Boy Color on Virtual Console (I really want this too!), and lots more PS1 games on PSN. There’s probably some others I can’t think of at the moment; at any rate, this year’s E3, as it is every year, is sure to have its share of surprises.

ETA (3:04 PM, EST): Wow, that was quick. That’s a shoe-in for a press conference mention. Also, it looks like the PS3 Slim rumor (which I’ve had my doubts about) is getting stronger by the minute.